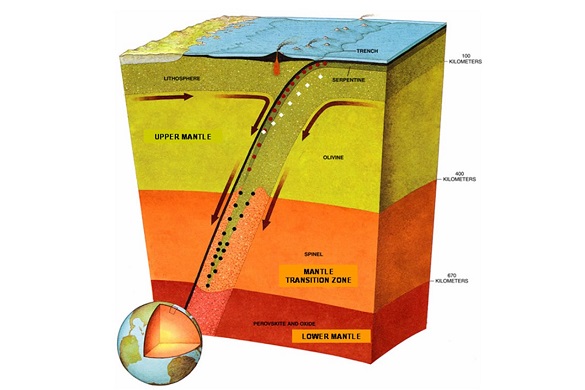 The University of Liverpool has been awarded a £3.3 million NERC Large Grant to study the structure of the Earth’s mantle, the solid yet hot and mobile part of the Earth which drives evolution of the crust.

The mantle lies between the Earth’s very hot core and the crust, the thin outermost layer. Mantle convection is the very slow creeping motion of Earth’s solid silicate mantle, with convection currents carrying heat from the interior to near the planet’s surface.

In the standard picture of the mantle, different minerals are stable at different pressures, and pressure is controlled by depth. Seismic waves confirm this, showing that the mantle is composed of layers of different densities: layer boundaries are controlled by depth, with a subsidiary influence of temperature. The variations in density create buoyancy contrasts which drive mantle movement – it is essential for our understanding of Earth evolution to understand such density variations. However, there are many anomalies in the seismic data that require further explanation.

This research project, led by Professor John Wheeler from the University’s School of Environmental Sciences, will investigate the effects of mantle “weather”, which lead to pressure variations even at particular depths.

Professor Wheeler, George Herdman Professor of Geology at the University of Liverpool, said: “Any weather map shows that air pressure at sea level varies because of air movements. In the same way, mantle pressure at a given depth will vary because of dynamic mantle movements, and such variations may account for otherwise problematic mineral variations. The project will create new numerical simulations of mantle dynamics and link these to seismic patterns in particular areas to test this idea”.

It will also investigate the effects of stress on mineral transformations. Although the mantle flows, it is strong and so the flow stresses are high. These will have direct effects on mineralogy, but there is limited understanding of those effects.

New experiments on mineral changes under stress and new numerical models will be used to explain and extrapolate their results: the outcomes will have wider implications as stresses influence changes in the types of crystal in all solids including manufactured materials. Such changes are relevant for understanding the behaviours of, for example,  lithium batteries, concrete weathering, and shape memory alloys.

Professor Wheeler added: “Looking across the whole of science, there is no consistent picture of such stress effects, and through this project we hope to stimulate some interdisciplinary discussion on this theme.”

The project is led by the University of Liverpool and the multidisciplinary project team includes scientists from the Universities of Manchester, Cambridge, Cardiff and University College London alongside partners in France and the USA.