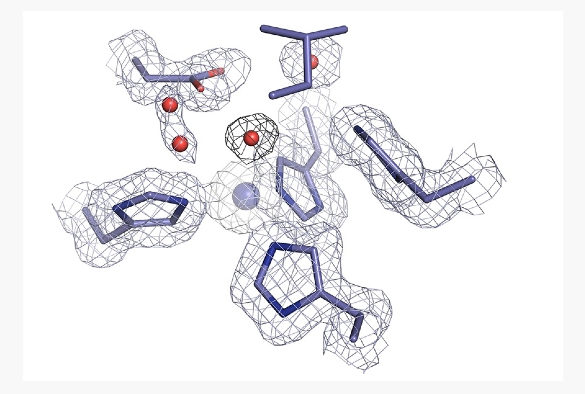 An international team of scientists, led by the University of Liverpool, has produced structural movies of a key enzyme involved in a biological pathway of greenhouse gas production that offer new insight into its catalytic activity.

A major contributor to global warming is the greenhouse gas nitrous oxide, which is 300 times more damaging to the ozone layer than carbon dioxide. Nitrous oxide is a by-product of the denitrification pathway, which occurs when special types of micro-organisms remove excess nitrate or nitrite from ecosystems and convert them back to nitrogen gas.

The first step of this process involves an enzyme called copper nitrite reductase (CuNiR), which converts nitrite to nitric oxide gas, using an electron and a proton. Recently, a CuNiR from a Rhizobia species has been discovered with a substantially lower catalytic activity. This species is abundant in agriculture and is a major contributor to the denitrification pathway and thus nitrous oxide.

CuNiR is a metalloprotein, meaning it contains metal ions to function correctly, in this case it contains two copper sites, one where catalysis occurs and another which receives and donates an electron needed for catalysis. Metalloproteins are widespread in biology, making up at least 30% of all proteins.

Researchers from the UK and Japan used single crystal spectroscopy and an X-ray crystallography approach known as MSOX (multiple structures from one crystal) to produce a molecular movie of the enzyme in order to understand why the activity is much lower in this CuNiR. X-ray crystallography is an important technique that allows the atomic details of biological molecules to be visualised in three dimensions, helping to understand how they are assembled, how they function and how they interact. MSOX is an advancement on this as it allows catalysis to be visualised in real time.

First author, PhD student Samuel Rose commented: “This research is important for two reasons. Firstly, it helps us to understand why the activity in this CuNiR is lower compared to others, which can help with future bioengineering to help tackle global warming. Secondly, it shows that the MSOX approach together with single crystal spectroscopy is an exciting combination that can help to dissect complex redox reactions in other fundamental metalloenzymes.”

Professor Samar Hasnain, who led the research at the University of Liverpool said: “It is only by understanding fundamental biological and chemical processes that we will be able to tackle major environmental issues.  The approach developed for this study would be applicable to many systems including those involved in hydrogen production (hydrogenase), nitrogen utilisation (nitrogenases) and photosynthesis (Photosystem II).”

The research is published in the journal PNAS.