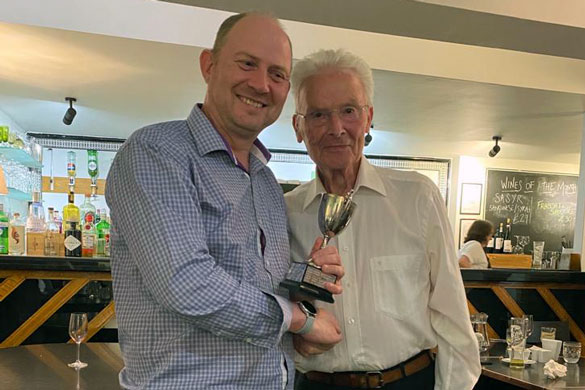 In July 1961 a group of cricketers from the University of Liverpool Staff Cricket Club embarked upon the inaugural Cambridge summer tour.

It is highly unlikely that any of those involved would have predicted that the tour would still take place today, and that one of the original tourists would go on to attend the 2022 version.

Lincoln Harrison was a young German lecturer in 1961 and attended the first tour. Later in his University employment he was Head of German and worked in Schools Relations. At the age of 89 Lin attended this year’s tour, and even gave his usual entertaining speech at the tour dinner.

The staff cricket team played regularly in Liverpool up until the late 1990s. Sunday and midweek fixtures kept the team part of the Liverpool cricket community. Teams were made up of staff, students and a couple of local players with team connections. The tour to Cambridge is the only time the team now plays.

Five games were played this year on the usual dry Cambridge grounds and resulted in two wins, two draws and defeat. A three-run victory over March Town in the heart of the Fens was a good start. Jesus College are a recent addition to the fixture list and they ended up two runs short and eight wickets down for an exciting draw. Further games against Stradbroke from Suffolk, Gentlemen of Cambridge and the Friday Cricket Club saw a win, a draw and heavy loss. All these matches were played at St Johns impressive cricket ground.

The Tour Dinner was once again at La Margherita restaurant by Magdalene Bridge, which has been the regular venue since 1988. It provided an excellent repast as Dr Lin Harrison, Professor Jim Simpson (ex Head of German and Comb Hons), Dr Mike Roberts CBE (ex post grad student and lecturer) entertained those present with stories of life, previous tours and absent friends.

Barry won the champagne moment for his remarkable six over point during an entertaining innings against the Gents of Cambridge. Rob Houghton (PE Teacher at St Margaret’s and Sefton Park CC record wicket taker) was the recipient of the batting award. Guy Lane (former Sports Administrator in the Guild 1985 to 1987) won the bowling award.

The organisers were also grateful to regular tourists; Jim Thornton and Ian Hughes who are former students of St Catherine’s College now Liverpool Hope Unviersity. The party is completed by family and friends of tourists who add essential youth to the ageing squad.

The 2023 event will take place from 24-28 July, and we look forward to more staff and postgraduates joining us next year.