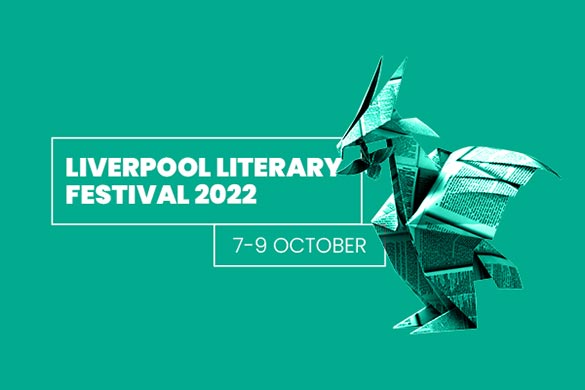 Liverpool Literary Festival returns this Autumn, showcasing an exciting line-up of writers including Oliva Harrison, who will deliver a moving talk on her latest book of poetry dedicated to her late husband, George Harrison.

The festival will welcome an eclectic range of authors throughout the weekend from Frank Cottrell-Boyce to Joanna Trollope – with weekend and day festival passes available for the first time.

“We have a terrific programme, with something to offer for everyone, whatever their interests – crime writing, poetry, fantasy, short stories, new fiction from new writers – in the beautiful surroundings of the iconic Victoria Gallery & Museum.

“This year, for the first time, it will be possible to buy a VIP pass for the whole weekend, or just for a day, so you won’t need to miss a thing.”

The festival opens on Friday 7 October, with Ann Cleeves, best-selling British crime writer – and the imagination behind successful TV adaptations, Shetland and Vera – delivering the Liverpool Literary Lecture, which this year takes place in the brand new, state-of-the-art Tung Auditorium, within the Yoko Ono Lennon Centre.

Liverpool-born Lauren John Joseph opens a packed Saturday to discuss their first novel, At Certain Points We Touch, a story of first love and last rites, conjured against a vivid backdrop of London, San Francisco and New York. Lauren, who now lives in London, made waves with their plays Boy in a Dress and A Generous Lover, and the experimental prose volume Everything Must Go.

We then hear from some of the freshest voices in Irish contemporary fiction, as Professor Frank Shovlin reveals the winners of this year’s John McGahern Annual Book Prize, before award-winning novelist and short story writer, David Szalay takes to the stage on his first ever visit to the city.

Patrick Gale opens a bumper afternoon, discussing his new work Mother’s Boy. He is followed by Liverpool-born poet, author and academic, Malik Al Nasir, whose newly-published Letters to Gil reveals the extraordinary influence the legendary Gil Scott-Heron had on his life following a chance meeting.

Saturday continues with generational talent, Joanna Trollope, who will reflect on her 30 years at the top of the fiction-writing industry, in conversation with University Vice-Chancellor, Dame Professor Janet Beer.

The evening will be rounded off with writer and producer, Olivia Harrison presenting her book Came the Lightening, in which she dedicates twenty poems to her late husband George Harrison to mark the twentieth anniversary year of his passing.

This memorable series of poems examines the intimacy and emotional connection of their relationship and is accompanied by a selection of photographs and mementos curated by Olivia, including some never-before-seen images of herself and George.

New adult fantasy author, son of the city and University of Liverpool alumnus Quillem McBreen, will start proceedings on the final day, introducing his debut novel The Tenets of Truth. Sunday will also feature a new generation of budding writers as the winners of the University’s Great Read competition are introduced.

Merseyside favourite Frank Cottrell-Boyce returns to the festival to discuss his unique journey from James Bond to Michael Bond. The man behind Millions wrote the 007 segment for the 2012 London Olympics Opening Ceremony and the hugely popular segment of the Platinum Jubilee celebrations this Summer, where the Queen met Paddington Bear.

Reflecting on Her Majesty’s Screenwriting Service, he shares his thoughts on how we create, use and abuse soft power, and the difference between patriotism and nationalism.

The festival then wraps up by welcoming multi-million best-selling author Adele Parks MBE, to discuss her latest novel, One Last Secret.

And to help make sure you don’t miss a thing, Liverpool Literary Festival is offering day and weekend passes for the very first time – giving you a guaranteed seat at every event applicable, as well as discounts and free drinks.

Liverpool Literary Festival takes place between October 7-9 at the Victoria Gallery & Museum on Brownlow Hill. To find out more, and reserve your tickets, please visit https://www.liverpool.ac.uk/literary-festival/