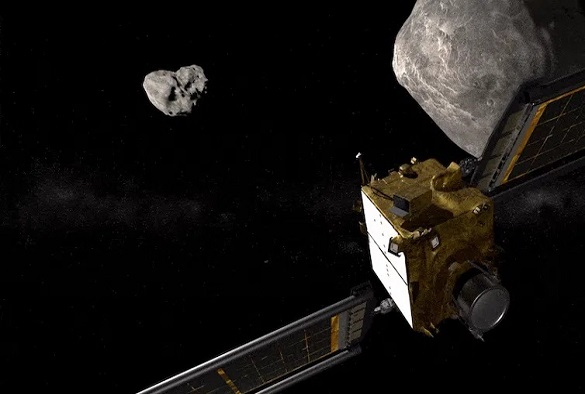 This article by Dr Stefania Soldini, from the University of Liverpool’s School of Engineering, was first published for The Conversation:

Nasa’s Double Asteroid Redirection Test (Dart) spacecraft is designed to be a one hit wonder. It will end its days by crashing into an asteroid at 24,000 kilometres per hour on September 26. Launched from Earth in November 2021, Dart is about the size of a bus and was created to test and prove our ability to defend the Earth from a dangerous asteroid.

Landing a direct hit on a target from 11 million kilometres away isn’t easy. But while this sounds far, the asteroid was actually selected by Nasa because it is relatively close to Earth. This will give engineers the opportunity to test the spacecraft’s ability to operate itself in the final stages before the impact, as it crashes autonomously.

The target asteroid is called Dimorphos, a body 163 metres in diameter that’s orbiting a 780 metre-wide asteroid called Didymos. This “binary asteroid system” was chosen because Dimorphos is in orbit around Didymos, which makes it easier to measure the result of the impact due to the resulting change in its orbit. However, the Dimorphos system does not currently pose any risk to the Earth.

Regardless, Nasa is attempting nothing less than a full scale planetary defence experiment to change an asteroid’s path. The technique being used is called “kinetic impact”, which alters the orbit of the asteroid by crashing into it. That’s essentially what is known as a safety shot in snooker, but played on a planetary level between the spacecraft (as the cue ball) and the asteroid.

A tiny deflection could be sufficient to prove that this technique can actually change the path of an asteroid on a collision path with the Earth.

But the Dart spacecraft is going to be completely blown apart by the collision because it will have an impact equivalent to about three tonnes of TNT. In comparison, the atomic bomb dropped on Hiroshima was equal to 15,000 tonnes of TNT.

So, with this level destruction and the distance involved, how will we be able to see the crash? Luckily, the Dart spacecraft is not travelling alone on its quest, it is carrying LICIACube, a shoebox-size mini spacecraft, known as a cubesat, developed by the Italian Space Agency and aerospace engineering company Argotec. This little companion has recently separated from the Dart spacecraft and is now travelling on its own to witness the impact at a safe distance of 55km.

Never before has a cubesat operated around asteroids so this provides new potential ways of exploring space in the future. The impact will also be observed from Earth using telescopes. Combined, these methods will enable scientists to confirm whether the operation has been successful.

It might, however, take weeks for LICIACube to send all images back to Earth. This period will be utterly nerve wracking – waiting for good news from a spacecraft is always an emotional time for an engineer.

An investigation team will look at the aftermath of the crash. These scientists will aim to measure the changes in Dimorphos’ motion around Didymos by observing its orbital period. This is the time during which Dimorphos passes in front and behind Didymos, which will happen every 12 hours.

Ground telescopes will aim to capture images of the Dimorphos’ eclipse as this happens. To cause a significant enough deflection, Dart must create at least a 73-second orbital period change after impact – visible as changes in the frequencies of the eclipses.

These measurements will ultimately determine how effective “kinetic impact” technology is in deflecting a potentially hazardous asteroid – we simply don’t know yet.

This is because we actually know very little of the asteroids’ composition. The great uncertainty around how strong Dimorphosis is has made designing a bullet spacecraft a truly enormous engineering challenge. Based on ground observation, the Didymos system is suspected to be a rubble-pile made up of lots of different rocks, but its internal structure is unknown.

There are also great uncertainties about the outcome of the impact. Material ejected afterwards will contribute to the effects of the crash, providing an additional force. We don’t know whether a crater will be formed by the impact or if the asteroid itself will suffer major deformation, meaning we can’t be sure how much force the collision will unleash.

Our exploration of the asteroid system does not end with Dart. The European Space Agency is set to launch the Hera mission in 2024, arriving at Didymos in early 2027 to take a close look at the remaining impact effects.

By observing the deformations caused by the Dart impact on Dimorphos, the Hera spacecraft will gain a better understanding of its composition and formation. Knowledge of the internal properties of objects such as Didymos and Dimorphos will also help us better understand the danger they might pose to Earth in the event of an impact.

Ultimately, the lessons from this mission will help verify the mechanics of a high-velocity impact. While laboratory experiments and computer models can already help validate scientists’ impact predictions, full-scale experiments in space such as Dart are the closest we will get to the whole picture. Finding out as much as we can about asteroids will help us understand what force we need to hit them with to deflect them.

The Dart mission has led to worldwide cooperation among scientists hoping to address the global issue of planetary defence and, together with my colleagues on the Dart investigation team, we aim to analyse the impact effects. My own focus will be on studying the motion of the material that is ejected from the impact.

The spacecraft impact is scheduled for September 26 at 19:14 Eastern Daylight Time (00:14 British Summer Time on September 27). You can follow the the impact on Nasa TV.