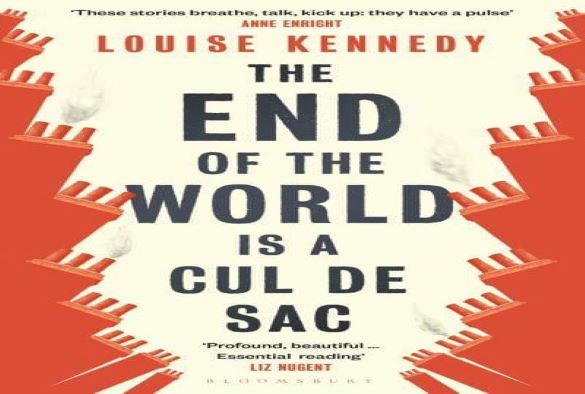 The winner of the John McGahern Prize for debut book of Irish fiction (2021) has been named as Louise Kennedy for her collection of short stories, The End of the World is a Cul de Sac.

Now in its third year, the prestigious prize was established by the University’s Institute of Irish Studies to promote new Irish fiction and to celebrate the memory of one of Ireland’s greatest masters of prose fiction, John McGahern (1934-2006).

Kennedy will read from her winning book and be presented with her £5,000 prize at the Liverpool Literary Festival at the Victoria Gallery and Museum on Saturday 8 October.

Having been whittled down from 24 entries, the winner was chosen from a three-book shortlist by novelist and Chancellor of the University of Liverpool, Colm Tóibín,

Commenting on the winning entry Colm Tóibín said: “The stories in Louise Kennedy’s The End of the World is a Cul de Sac are beautifully crafted, wry in tone, often bleak. Kennedy can capture a character in a few sentences and the essence of a complex relationship in a few paragraphs.

“What is notable about the stories is their sense of felt life and their ability to match painful and difficult truth with wit and sharp humour. While the stories are smart and contemporary, concerned with the way we live now, they also contain dramas that transcend their own time and setting.”

Professor Pete Shirlow, Director of the Institute of Irish Studies, remarked on the growing popularity of the prize: “With 24 very strong entries for this year’s competition, we saw 50 per cent growth from 2020.

“As in other years there was a nice balance of novels and short stories, mirroring John McGahern’s own tremendous facility in both genres, and we are delighted that a story collection has won for 2021. Louise Kennedy’s remarkable rise to the top of contemporary Irish fiction after a late start should be encouraging for all writers taking their first steps.”

Kennedy, from Hollywood in County Down, only began writing fiction in her forties as a result of a friend coaxing her to join a Sligo writing group. Though she had been an avid reader from childhood, it had never occurred to her to try writing and she had spent most of her adult professional life working as a chef.

Her book is the first collection of short stories to have been awarded the John McGahern Prize which was won in 2019 by Adrian Duncan’s Love Notes from a German Building Site (Lilliput) and in 2020 by Hilary Fannin’s The Weight of Love (Doubleday).

Entries for the John McGahern Book Prize 2022 are now open.