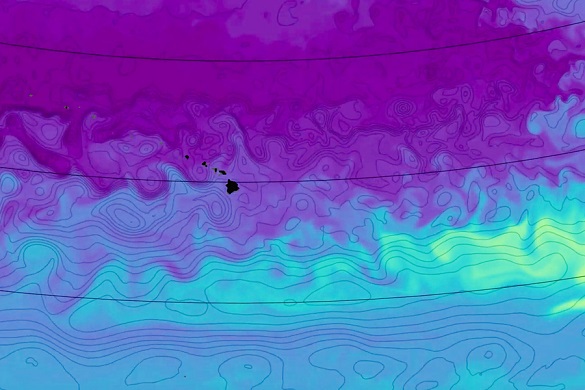 A new study involving a University of Liverpool ocean scientist finds that swirling waters replenish nutrients in open ocean and could mitigate some climate change effects.

Subtropical gyres are enormous rotating ocean currents that generate sustained circulations in the Earth’s subtropical regions just to the north and south of the equator. These gyres are slow-moving whirlpools that circulate within massive basins around the world, gathering up nutrients, organisms, and sometimes trash, as the currents rotate from coast to coast.

For years, oceanographers have puzzled over conflicting observations within subtropical gyres. At the surface, these massive currents appear to host healthy populations of phytoplankton — microbes that feed the rest of the ocean food chain and are responsible for sucking up a significant portion of the atmosphere’s carbon dioxide.

But judging from what scientists know about the dynamics of gyres, they estimated the currents themselves wouldn’t be able to maintain enough nutrients to sustain the phytoplankton they were seeing. How, then, were the microbes able to thrive?

Now, a team of researchers from the University of Liverpool and MIT have found that phytoplankton may receive deliveries of nutrients from outside the gyres, and that the delivery vehicle is in the form of eddies — much smaller currents that swirl at the edges of a gyre. These eddies pull nutrients in from high-nutrient equatorial regions and push them into the centre of a gyre, where the nutrients are then taken up by other currents and pumped to the surface to feed phytoplankton.

Ocean eddies, the team found, appear to be an important source of nutrients in subtropical gyres. Their replenishing effect, which the researchers call a “nutrient relay,” helps maintain populations of phytoplankton, which play a central role in the ocean’s ability to sequester carbon from the atmosphere. While climate models tend to project a decline in the ocean’s ability to sequester carbon over the coming decades, this “nutrient relay” could help sustain carbon storage over the subtropical oceans.

Professor Ric Williams, University of Liverpool Chair in Ocean Sciences and co-lead of the University’s Climate Futures research theme, instigated the study after participating in a field programme in the North Atlantic.

He said: “How the plants of the ocean, the phytoplankton, are sustained over much of the open ocean is poorly understood. Our study reveals that the role of eddies and other fine-scale motions in the ocean are crucial to maintaining the growth of phytoplankton. This result is particularly important as nearly all of the climate models providing future projections are unable to resolve the ocean eddies, and so are missing an important part of the carbon cycle.”

The paper `A nutrient relay sustains subtropical ocean productivity’ (doi: 10.1073/pnas.2206504119) was published in the Proceedings of the National Academy of Sciences.

The paper’s first author is Mukund Gupta, now a postdoc at Caltech and previously a PhD student at MIT, and the co-authors are Ric  Williams at the University of Liverpool, and Jonathan Lauderdale, Oliver Jahn, Christopher Hill, Stephanie Dutkiewicz, and Michael Follows at MIT.