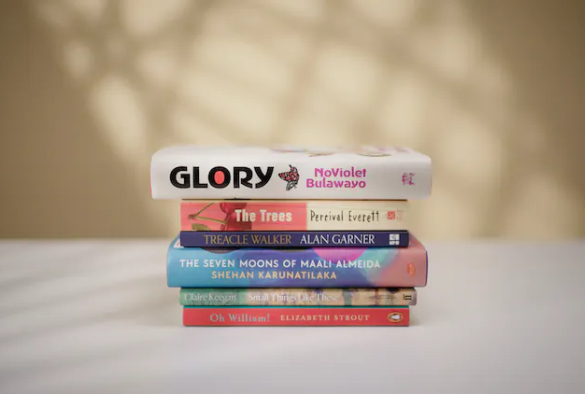 By Naomi Adam, a postgraduate researcher in the University’s Department of English.

They say that everyone has a book in them. But how about a Booker prize?

That’s probably what the six shortlisted authors of the Booker prize 2022 will be wondering as they count down the days to the live-streamed awards ceremony.

On Monday 17 October, amid the opulent surrounds of a packed Guildhall, one of them will have their novel selected as the 54th winner of a literary award widely considered the country’s most prestigious, most lucrative – and most controversial.

First awarded in 1969, the Booker prize annually selected a fine work of long-form fiction published in English within Britain over the preceding calendar year. In a move towards inclusiveness, an international prize was introduced for writers of books translated into English in 2005, and in 2014 its main English–language prize was changed to include books written by authors from anywhere in the world.

Since then, it has made the names of literary heavyweights like Bernardine Evaristo, Anne Enright, Julian Barnes and the late Hilary Mantel. Yearly, it attracts worldwide attention. In 2020, for example, the (virtual) prize-giving ceremony was attended by none other than former US president, Barack Obama.

Yet just as regularly, the Booker causes controversy. In past years it has proven so unpredictable that even one of its winners likened the literary award to “a chicken raffle”. Referring to an Australian custom of raffling poultry as a fundraising activity, the phrase suggests luck, rather than talent, is key to scooping the prize.

The unpredictability of the prize comes in large part from some slightly vague criteria. According to its rulebook, the Booker prize aims to spotlight “the finest in fiction”. What, though, does this actually mean? Using the power of the mean average (and with a little help from Excel), I’ve turned this soundbite into some cold, hard stats. Based upon each winner since the turn of the millennium, here is a snapshot of the average Booker winner. Nominees, take note…

A 408-page hardback of 581 grams (that’s equivalent to a large sweet potato), published by Bloomsbury in the May before the awards ceremony. It is a work of historical fiction, set in and around London (the capital features four times more frequently than any other city in the roster of recent Booker winners) some time during the 1980s.

It explores the themes of time and memory, love and loss, and family dynamics. It features an introspective protagonist, one with a career in the creative industries who is something of a social outcast, and is narrated in the past tense from either a first- or third-person perspective. The novel incorporates multiple viewpoints, many of them unexpected: think the recently deceased, or a herd of grazing cattle. It is sparse on punctuation, and heavy on political satire. Colonialism and its after effects are major topics of interest. Oh, and it’s got a nice mid-blue front cover, too.

White, British, male, and aged 51 years and 6 months. Yes, despite recent efforts towards greater inclusivity, the average Booker-winning author still fits the writerly stereotype of male, pale and stale. (Historically, males have been more than twice as likely to win as females, though this year’s shortlist strikes an even gender balance.)

The author has an established career behind them, with a writing output of six books and one previous Booker shortlisting. They like to dabble in other mediums too, particularly poetry and screenwriting. They’re also a Gemini – since 2000, those born under the sign of the twins have won twice as often as chance would predict. Must be written in the stars.

Working out the winner

So, just what do all these stats suggest about this year’s shortlist? Bookies’ odds currently reckon Alan Garner’s Treacle Walker as 3/1 favourite, and the novel certainly ticks several boxes, from its exploration of time and memory – its epigraph is “Time is ignorance” – to its fetching blue cover art.

Despite Glory’s orange-and-pink cover art, things are also looking rosy for NoViolet Bulawayo – she’s the only author of the six to have been previously shortlisted.

A win is looking less likely for Percival Everett’s The Trees. It’s a mix of crime and black comedy, two genres which have traditionally failed to snag success.

Likewise with Elizabeth Strout’s Oh William!: a “trequel” has never won (nor has a novel with an exclamation mark in its title).

Claire Keegan’s Small Things Like These, set Christmas 1985, fulfils the brief time-wise, but at a scant 116 pages (238g) its lack of heft is likely to count against it.

Personally, my money would be on Shehan Karunatilaka’s The Seven Moons of Maali Almeida. Historical fiction? Check. Past-tense deep-dive into recent postcolonial trauma? Check. Narrator as creative (a photographer), outcast, ghost? Check, check, check. It even features the lucky number seven, the only number ever included in the title of a Booker-winning work.

As a serial gambler, the titular Maali knows that “the odds of winning the lottery are one in eight million”. With the Booker prize “chicken raffle”, these odds narrow significantly to one in six, or possibly even more, judging from past patterns.

Will the Booker-winning book on the shelf be repeating itself in 2022? Only time will tell.