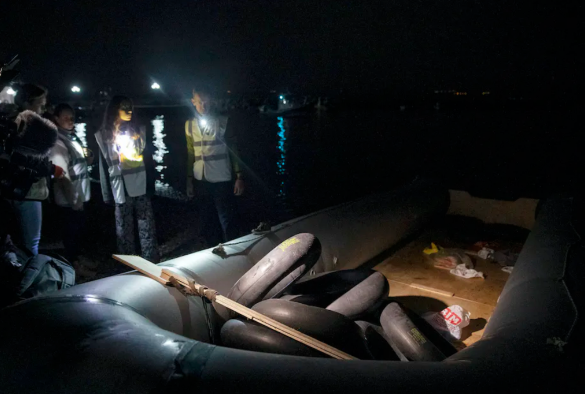 A rubber dinghy arrives on a Greek island at night. Dimitris Tosidis / EPA-EFE

This article, written by Gemma Bird, a Senior Lecturer in Politics and International Relations, was originally published in The Conversation:

A classified report by EU anti-fraud office Olaf has accused Frontex, the EU border agency, of covering up human rights violations in Greece. The report was made public by German media. It comes after a months-long investigation into allegations that Greek border officials were conducting pushbacks – preventing people from exercising their right to claim asylum and returning them to another state or abandoning them at sea.

Pushbacks are difficult to prove, as the term is not defined in EU law, but in some circumstances can be a violation of international immigration and human rights law, as well as maritime law.

Frontex chief Fabrice Leggeri resigned in April after being investigated for the report, which concluded in spring 2022. Now, its publication reveals allegations that Frontex officials were involved in covering up or not investigating serious violations of fundamental human rights throughout 2020.

As part of my research, I have been working with humanitarian organisations on the Greek island of Samos for many years. For months, these groups have been calling on Frontex to leave Greece over alleged violations of international law. The revelations in the report add further urgency to these calls.

In July 2022, a group of seven humanitarian organisations active on Samos called on Frontex to trigger Article 46 of the European Border and Coastguard Regulation. This legal mechanism requires the Frontex executive director to cease operations or withdraw funding from its operations in a particular country if there are “violations of fundamental rights … that are of a serious nature or are likely to persist”. The organisations argue that alleged illegal pushbacks by the Greek coastguard meet that standard.

The UN refugee agency UNHCR has been tracking alleged incidents of informal returns, recording almost 540 between January 2020 and June 2022. Journalists and humanitarian groups have also reported incidents at the Greek border where loss of life and other violations of human rights allegedly occurred.

Using evidence from interviews, WhatsApp messages, office searches and official documents the Olaf report concludes that Frontex officials witnessed these serious incidents but often did not report them. One incident described in the report alleges that in April 2020, Greek coastguard officials rescued a group of migrants from a rubber boat on to one of their vessels. They then transferred them back onto the rubber boat and returned them to Turkish waters, where the migrants were left adrift without lifejackets.

The report alleges that Frontex downplayed or withheld information about this and other possible rights violations from its own investigative officer, and did not report witnessing pushbacks, fearing repercussions by Greek authorities.

In response, Frontex said that the activities alleged in the report were “practices of the past”, and that they will take measures to address them. Yet, according to humanitarian groups, the lack of serious incident reports submitted in the Samos region suggests that Frontex is not properly engaging with its own mechanism for reporting serious incidents. As one person on the ground told me:

It is astounding that since [Frontex] was called upon to implement a credible mechanism, there has been no notable increase in the number of [serious incident] reports being submitted. The facts on the ground, widely reported by the media and civil society, about the violations and even risks of violations to fundamental rights, seem to fail to meet the standard of proof that Frontex is expecting.

Frontex said it has worked with Greek authorities on “an action plan to right the wrongs of the past and present”, but indicates it will continue to operate in Greece.

But there is precedent for Frontex ceasing operations within a country. In 2021, the Court of Justice of the European Union found that Hungary violated EU law by blocking access to asylum at the Serbian border.

When the country failed to change its practices, Frontex left Hungary, saying that its work can only be successful if it is in line with EU laws. The decision to leave, however, came after many years of pressure by humanitarian groups and was only implemented following the court’s decision.

The court’s decision in Hungary relied on findings that the country’s activities were incidents of a “serious nature”. The question of what can be understood as an incident of serious nature is at the heart of calls for Frontex to now also leave Greece.

Humanitarian organisations argue that the incidents reported at Greece’s borders do indeed meet this requirement, but that Frontex is not properly engaging with the serious incident report process. The findings in the Olaf report also support this.

Frontex has said it will change, including by making its procedure to report fundamental rights violations “more robust”. It will, however, continue to operate in member states “when they need it most” – suggesting it has no plans to leave Greece.

The Olaf report is further evidence that incidents of a serious nature have occurred. It is the duty of the EU and all its member states to protect the rights of people fleeing persecution and war when they arrive at Europe’s borders. When those rights are not protected by a state, the organisations of the EU have a duty to demand better of that state, as they did in Hungary.

There is precedent for the European commission to put pressure on member states when it comes to treatment of asylum-seekers. In Hungary, when the country failed to comply with the court of justice’s ruling, the commission asked the court to impose financial penalties.

The allegations in the Olaf report show that the commission should no longer thank Greece for being Europe’s “shield”, as the president of the EU commission Ursula von der Leyen did in March 2020. Instead, they should join with humanitarian activists in demanding that Greece respect the human right to claim asylum for people escaping persecution and war.