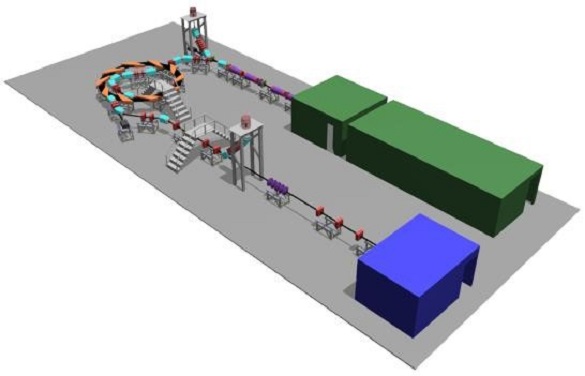 University of Liverpool physicists are providing their expertise to a new UKRI research project that will underpin the next generation of ion radiotherapy treatments for cancer.

The £2million project will support the establishment of the Ion Therapy Research Facility (ITRF), which will bring together leading UK and international clinicians, scientists, engineers and industry to exploit the UK’s advanced expertise in developing new laser technologies for medical applications.

The Laser hybrid Accelerator for Radiobiology Applications (LhARA) forms part of ITRF and University of Liverpool physicists are developing technology for LhARA.

LhARA will use laser sources to create intense proton and ion beams which it will steer to their target with the help of plasma lenses, guided by beam monitoring systems that are being developed by the University’s Physics Department.

Developing these new technologies will mean that LhARA can provide more types of ions with greater control over how they are used for treatment than is possible with current radiotherapy facilities, and do this at a lower cost.

For this reason, the NHS has recently opened two proton therapy centres, one at the Christie in Manchester and another at UCLH in London. These are in addition to the proton facilities at the Clatterbridge Cancer Centre in Bebington which are dedicated for tumours of the eye.

LhARA will allow investigations into the use of carbon and other ions which are even more effective at killing cancer cells than protons.

Professor Ken Long from Imperial College, who is leading the LhARA project, said: “It is great news that we have got funding to start up LhARA. In the next two years we will start tests of the laser source concept and investigate plasma lenses for steering particle beams, two key technologies we must develop for the project.”

Another major part of the LhARA programme is the development of new treatment monitoring techniques. The LhARA team has shown that the ion beams will produce ultrasound signals. Measuring these while radiotherapy treatment is occurring will give an instantaneous picture of the effect of the radiation and of the treated and surrounding tissues, which will take treatment optimisation for the individual patient to new levels. This cutting-edge R&D will be carried out within the University’s QUASAR Group,  led by Professor Carsten P Welsch.

As LhARA is developed, intermediate stages of the facilities will be used to study the effects of the beams it produces on cancer cells as well as on normal tissue.

Professor Jason Parsons, a radiobiologist from the University of Liverpool who is engaged with the LhARA programme, said: “This will greatly accelerate our understanding of how protons and ions interact and are effective in killing cancer cells, while simultaneously giving us experience of running the novel beam provided through the LhARA machine. Together, the technology and the science will help us make a big step forward in optimising radiotherapy treatments for cancer patients.”

Organised through the Science and Technology Facilities Council’s (STFC) Daresbury Laboratory, at Sci-Tech Daresbury,  UKRI is investing £2 million in researching the next generation of radiotherapy treatments for cancer, through the development of the Ion Therapy Research Facility (ITRF).

Image: LhARA – The laser and the laser-target vessel are housed in a shielded bunker (green structures). The capture line, composed of three Gabor lenses emerges, from the bunker and guides the beam to the acceleration system and biological research laboratories.