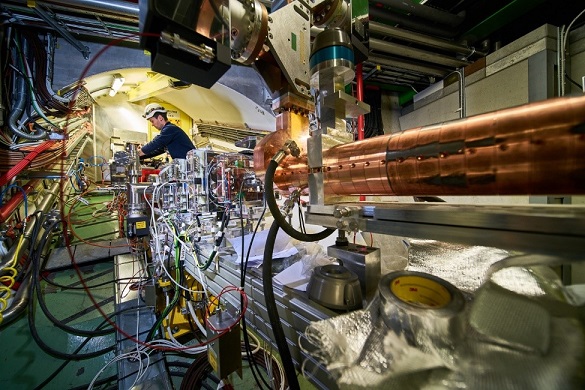 The University of Liverpool is one of the beneficiaries of a major award from the Science and Technology Facilities Council (STFC) to support the participation of UK institutions in the AWAKE experiment at CERN.

The aim of the AWAKE experiment is to demonstrate a new method to accelerate electrons to very high energies. The new technique, called proton-driven wakefield acceleration, takes advantage of the strong electric fields created in the wake of a proton beam travelling through a plasma. These fields can have gradients of up to 1,000 times higher than the fields that can be achieved in conventional RF accelerators, potentially shortening the length of the machine by a similar factor. ​

The first phase of the AWAKE experiment has already demonstrated the merits of the scheme with the successful acceleration of a bunch of electrons to 2 GeV in 10 metres of plasma driven by a 400 GeV proton beam (see Nature article). The second phase, which is already underway, will seek to upscale the technique to bring the electron energies closer to the range where they can compete with conventional colliders.

The UK is a major participant in AWAKE, making leading contributions to the beam line design, diagnostics to characterise the initial and accelerated beams, and development of a plasma cell scalable to over hundreds of metres and the associated diagnostic systems.

The £4M award from STFC, of which £700k will go to University of Liverpool physicists will support the UK contributions to AWAKE Run 2 with the development of a new electron injector, a new plasma cell, and several new diagnostic tools.

The scientific coordinator of AWAKE-UK, Professor Matthew Wing of UCL said: “I am absolutely delighted with this major award from STFC. AWAKE is a unique facility that could open up the possibility to new particle physics experiments through accelerating particles to higher energies over shorter distances than is currently possible using conventional acceleration methods.  I am looking forward to many new exciting results over the coming years and further advances in this cutting-edge technology.”

The University of Liverpool group, led by Professor Carsten P Welsch, is developing a set of novel beam diagnostic techniques that are necessary to monitor and optimise the unique properties of the proton and electron beams involved in AWAKE.

Professor Welsch, who is also the scientific project manager of AWAKE-UK, said: “The major funding award is fantastic news for Liverpool and the AWAKE-UK collaboration. This ground-breaking experiment has already realised several ‚world‘s first‘ breakthrough measurements and we have very exciting plans for the future.”

The UK contingent in AWAKE comprises, apart from the University of Liverpool, the universities of Lancaster, Manchester, Oxford and Strathclyde, as well as Imperial College London and University College London.

To find out more about the project, please visit: http://www.awake-uk.org/