The internationally-renowned countertenor singer, Reginald Mobley visited the University of Liverpool on Thursday, 3 November, to complement his research for the CounterTenor Project which aims to celebrate historical diversity in classical music.

The project, a collaboration between the Arts and Humanities Research Council (AHRC), part of UK Research and Innovation (UKRI), and Research Libraries UK involves the American singer working with archivists, librarians, and curators, to bring to light the work of Black musicians and composers.

In an earlier interview with the Guardian about the project, Reggie has said: “I’m digging around for music by black musicians working in England in the past…I’m ready to un-whitewash the classical music canon to show who we really were and to show that the past is actually in full colour.”

On his packed visit to the University of Liverpool, Reggie was firstly given a tour of our iconic Victoria Gallery and Museum where he met with members of the Museums and Galleries team to hear about their work, in collaboration with colleagues across the institution, to re-evaluate the presentation and description of the university’s collections in relation to historical slavery and colonialism.

He was then shown around our Institute of Popular Music’s extensive jazz archive.  Jazz exerted a strong influence on Reggie’s earlier musical work, and he was able to review the University’s jazz collection which includes a varied and diverse selection of records and tapes including some unique and historically important acetates and recordings from the 1950s onwards.

Reggie was also given the opportunity to explore the university’s Special Collections and Archives, held in the Sydney Jones Library. Included in the display were illuminated medieval manuscripts with musical settings of chants and antiphons used in religious services, and the 1898 first edition of the score of Hiawatha by the renowned British composer Samuel Coleridge-Taylor, whose father was from Sierra Leone. 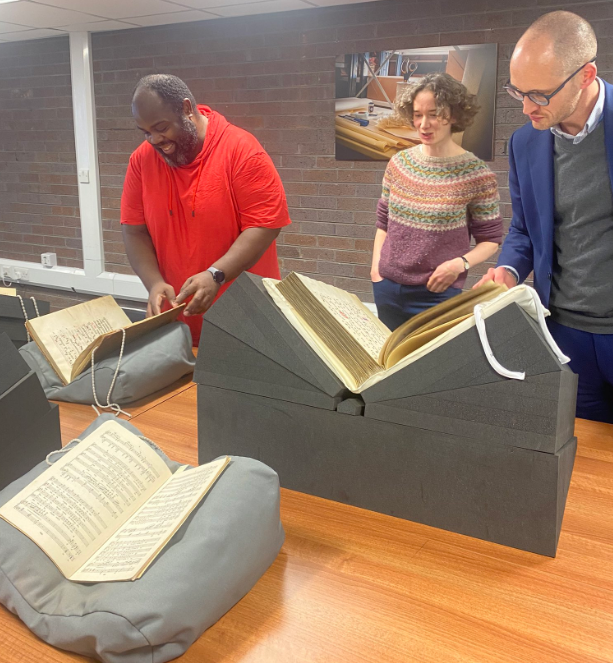 The visit was rounded-off with a tour of the state-of-the art Tung Auditorium, so that Reginald could see the city’s latest remarkable performance space within the Yoko Ono Lennon Centre.

Reggie’s visit to the University is in addition to a series of visits to major research libraries and museums across the UK, including the International Slavery Museum in Liverpool, the British Library, the Brotherton Library (Leeds), the Borthwick Institute for Archives (York), the Fitzwilliam Museum (Cambridge).

“It was fascinating to hear about his ongoing research and work, as well as his career as a counter-tenor. We look forward to working with Reggie as he continues his important research to uncover connections between people, places, collections, and the musical canon.”