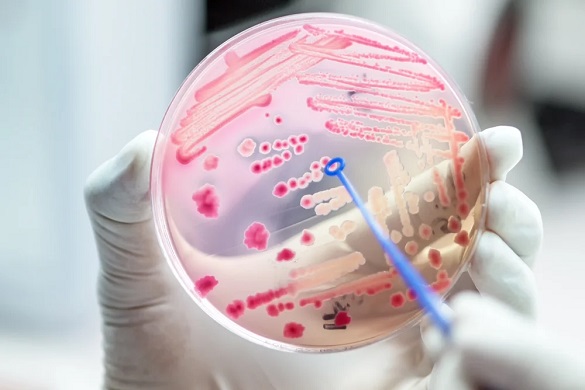 Professor Rasmita Raval is Director of the Open Innovation Hub for Antimicrobial Surfaces at the University and Co-Director of National Biofilm Innovation Centre.

This article was originally published in the New Statesman.

Biofilms play a critical role in countering the threat from resistant microbes.

A key step in fighting infection and anti-microbial resistance is understanding how bacteria interact with surfaces. New knowledge allows us to develop advanced surfaces that prevent the development of sophisticated bacterial colonies, or biofilms, offering a new approach in the war against microbes.

Within hospitals and other healthcare settings, surfaces play a crucial role in the epidemiology of healthcare-associated infections (HAIs) – infections acquired by a patient during their stay in hospital. Although some HAIs can be treated easily, others can seriously impact a patient’s health, extending their stay in hospital and increasing costs for healthcare providers, as well as causing additional distress. HAIs are an issue of critical societal importance. Each year, they are estimated to cost the NHS over £2bn and cause around 37,000 deaths across Europe.

Anti-microbial resistance (AMR) is a major 21st-century challenge. AMR arises when the organisms that cause an infection evolve in ways that allow them to survive modern medical treatments such as antibiotics. AMR occurs naturally within the biological world but has been accelerated by factors including the misuse of medicines, poor infection control, and globalisation. Warnings from the World Health Organisation and the UK’s chief medical officer have underlined the serious threat of AMR.

Biofilms play a critical role in both infection and AMR, with up to 80 per cent of associated microbial infections linked to biofilms. They are sophisticated communities of microbes with defence mechanisms that have evolved over millions of years. These dense communities are able to cooperate, communicate and have a greater resistance to antibiotics and anti-microbials than individual organisms. Most chronic wounds, such as diabetic ulcers, are infected with biofilms that stop them from healing. Once a biofilm is formed and developed it is almost impossible to overcome. Therefore, it is important for surface scientists to instead focus on preventing biofilms forming in the first place.

A key weapon against AMR is knowledge and an understanding of how bacteria interact with surfaces in hospitals, such as catheters, endotracheal tubes used in ventilators, and patients’ wounds. The economic health-related impact of biofilms is estimated to cost the global economy around $387bn per year, with a significant proportion of HAIs in the NHS being urinary tract infections associated with biofilms on catheters.

Surface science research provides us with new insights to enable us to engineer advanced surfaces that inhibit attack or stop micro-organisms from becoming virulent biofilms, and therefore can prevent infection. At the University of Liverpool, our work sits at the vanguard of this emerging field, seeking to translate frontier research into antimicrobial technology platforms.

Biofilms can form on any surface in any environment. Biofilms have an impact across the entire economy, affecting sectors such as healthcare and medical devices, food and drink, consumer products, and marine industries. Microbial activity and biofilms on surfaces and interfaces are estimated to cost the UK economy around £45bn each year due to a range of factors including product contamination, energy losses and equipment damage.

Developing solutions to the issue of biofilms is also of critical importance for the UK reaching its 2050 net zero target. For example, creating a more effective alternative to marine paint for use on boats would reduce attachment of bacterial colonies and larger marine organisms – reducing drag, increasing fuel efficiency and therefore reducing carbon emissions.

Recognising the critical importance of biofilms, the Open Innovation Hub for Antimicrobial Surfaces was founded in 2014 to address these issues. Harnessing over 20 years of research leadership in surface science at the University of Liverpool, the Hub is a multidisciplinary initiative tackling the economic burden of microbial activity on materials, surfaces and interfaces in UK industry, and addressing the urgent problem of increasing AMR.

Established through initial investment from Innovate UK and the European Regional Development Fund, the Hub has developed strong academic-industrial partnerships to address challenges and accelerate technologies. The Hub catalyses rapid knowledge exchange between academic, clinical and industrial partners who share their expertise to drive forward innovation.

The Hub is focused on designing and engineering a new generation of smart surfaces and materials that can inhibit bacterial, viral and fungal attachment and proliferation. To stimulate economic growth, the Hub is also providing proactive resources to companies to facilitate knowledge transfer between partner organisations, link businesses to new technology and leading academic expertise, create new supply chains and boost innovation. Another area of focus for the Hub is providing cross-disciplinary skills training to innovators in industry, as well as NHS infection prevention and control practitioners.

In 2017, the Open Innovation Hub for Antimicrobial Surfaces became a co-founding partner of the £26m collaborative National Biofilms Innovation Centre (NBIC). Funded by the UK’s Biotechnology and Biological Sciences Research Council, Innovate UK, and the STFC Hartree Centre, NBIC is a collaboration between the universities of Liverpool, Southampton, Nottingham and Edinburgh, with 59 associate research institutions and a growing base of more than 250 companies. NBIC was established to deliver the breakthroughs needed to prevent, detect, manage and engineer biofilms, placing the UK at the very forefront of science and innovation in this critical field.

You can read the original article here.