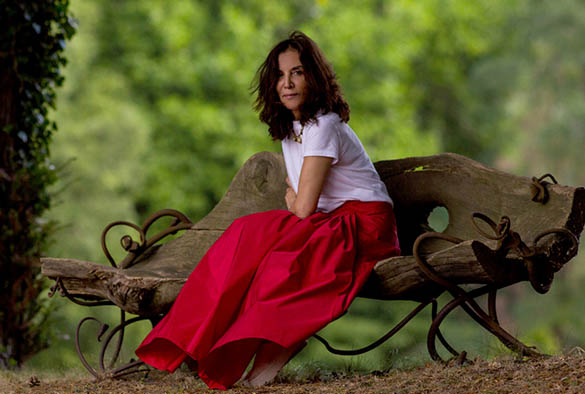 The University of Liverpool is delighted to welcome writer and producer Olivia Harrison to present a book of poetry dedicated to her late husband, George Harrison.

In a moving tribute, Olivia will read from Came the Lightening, her book of twenty poems to mark the twentieth anniversary of George’s passing.

This memorable series of poems will examine the intimacy and emotional connection of Olivia and George’s relationship. She will delve into the phenomenon of losing a partner and the passage of time.

The poetry will be accompanied by a selection of photographs and mementos curated by Olivia, including some never-before-seen images of herself and George.

The reading will take place on Wednesday 14th December at 6.30pm at the University’s state-of-the-art Tung Auditorium, a 400-seat acoustically optimised, flexible, music performance space, capable of facilitating chamber music, vocal groups, electro-acoustic and multi-media work, or up to a 70-piece orchestra.

Olivia will be in conversation with Dr Mike Jones from the University’s Department of Music and there will be chance to buy a pre-signed book after the event via our festival bookseller, Blackwell’s.

He has written a number of publications about industry figures including George Harrison. In 2017, Mike wrote, directed and produced ‘George Harrison and Indian Music’, a concert performed at Liverpool Philharmonic.

Speaking about Olivia’s appearance at the Mike said: “I’m delighted to be welcoming Olivia Harrison to campus for what will be a fascinating and moving discussion about her life with George.

“I previously interviewed Olivia about her and George’s philanthropic work as part of our Yoko Series in the lead up to the opening of our Yoko Ono Lennon Centre. Now that the Centre, with the fabulous Tung Auditorium, is a fixture in Liverpool’s cultural scene, it will be great to chat with Olivia in the fantastic surroundings of the Tung.

“Make sure you book your tickets and we look forward to seeing you there!”

You can view a previous interview with Mike Jones and Olivia: George Harrison: Transcending The Beatles – Yoko Ono Lennon Centre – University of Liverpool

This event was postponed during our October Liverpool Literary Festival. All previous ticket holders have been contacted separately about the event.

The Tung Auditorium is situated in the Yoko Ono Lennon Centre on the corner of Grove Street and Oxford Street. You can find out more about the event and book tickets here.