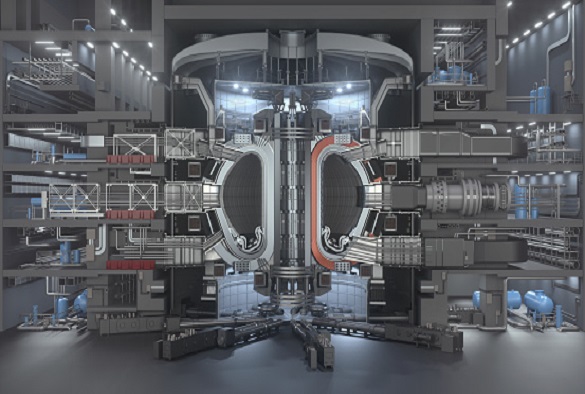 Professor Karl Whittle is Professor of Zero Carbon & Nuclear Energy at the University’s School of Engineering:

The recent announcement by the National Ignition Facility (NIF) at Lawrence Livermore National Laboratory (LLNL) in the US is the first step in the development of nuclear fusion as an energy source.

It has shown that nuclear fusion, the joining of two atoms releasing energy, is possible as an energy source here on the planet. After all the only other locations where we know it to work are within stars, and this is where the challenges lie, as replicating a star terrestrially is tricky.

Going forward the key challenges are how to sustain a fusion reaction, how to build a fusion reactor that outputs electricity, and where to get the fuel from.

Starting with a sustainable fusion reaction, to achieve this we need to compress isotopes of hydrogen gas to overcome repulsion between the atoms, think of putting two magnets of the same poles to each other they repel each other.

In a star this is done with the help of high temperature and gravity which is not really possible here on the Earth, so we use either inertial confinement which LLNL uses, or magnetic confinement which we use here in the UK at UKAEA, and will be using at ITER in Caderache, France.

Each method faces challenges in both scale up and, possibly more importantly, how they can be built, as successful fusion releases energy effectively as heat, which raises the temperature of the plasma to very high temperatures, ~ 150 million Kelvin, placing a load on the containment greater than the space shuttle had on re-entry into the atmosphere. This heat places a strain on the materials being used to contain the fusion process as we don’t want it to melt, but given the nature of the plasma limits what we can build it out of.

The second major challenge is how to convert this heat to electricity, most power stations heat water to boiling, and then use steam to drive a turbine generating electricity. In a fusion core this approach is likely to be used initially, but it faces a challenge in taking the heat out, and it is linked with generating the fuel, more specifically the tritium required, the final challenge.

In a fusion reactor, the first type of fusion, as used at LLNL, will be fusing two isotopes of hydrogen, deuterium and tritium, as this reaction occurs at a slightly lower temperature than others. Deuterium is naturally found on the planet, wherever there is water there is deuterium, which is stable and harmless, so easy to get. Tritium on the other hand, is found in trace amounts, with an estimated ~20 kg worldwide, forming from cosmic ray bombardment with the atmosphere and some fission reactors, and is radioactive with a half life of ~12 years.

This is the key challenge for running a fusion reactor, in order to fuel the reaction, we need to make tritium, which we can do by capturing the neutrons from the fusion process, and react them with lithium. To make enough tritium we need to capture all of the neutrons, or multiple those caught. The challenge, we still need to cool the reactor to prevent melting, but we also need to collect the neutrons to make the fuel…how to balance this is key to achieving fusion at the large scale, impacting reactor design.

The good news from LLNL shows it is possible to get more energy out from fusion than put in, up till now not achieved, showing that the research being undertaken here at Liverpool in fusion helps the development of fusion as a reliable zero emissions energy source, and brings the day closer when fusion power stations are used commercially.