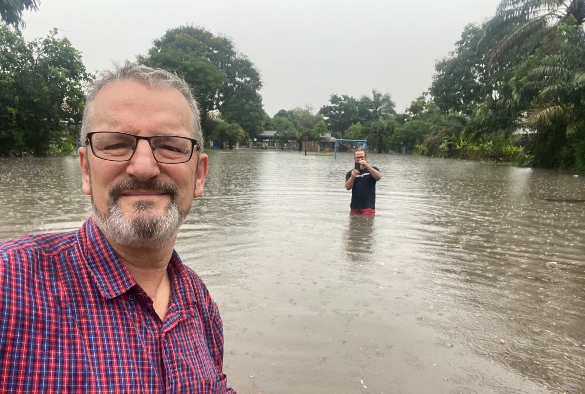 By Professor Matthew Baylis, Executive Dean of the Institute of Infection, Veterinary and Ecological Sciences.

All the omens were bad for a four-day trip to Kinshasa in mid-December: freezing weather across the UK, huge airport queues, unexpected and expensive Covid-19 requirements at check-in, and then a missed connection which meant an unplanned 24 hours in Turkey. Boarding the next day in Istanbul, my colleague Justin, from the Liverpool School of Tropical Medicine, commented that this was probably not going to be the last of our problems. Little did we know.

Seven hours later we landed in Kinshasa, the capital of the Democratic Republic of Congo (DRC). It was the first time for both of us and, with a mix of excitement and trepidation, we collected our luggage and met our driver. It was 1:30 in the morning. We drove for thirty minutes along wide highways and bumpy roads. I noticed a few people sleeping outside on the street and the occasional small group around a bar but otherwise it was deserted. It began to rain.

By the time we arrived at the Institute of Tropical Medicine (ITM) the rain had become a tropical downpour.  A security guard led us across a field through deep puddles and running streams to a line of buildings. We passed over a wall and entered our accommodation, glad to be out of the rain. The accommodation was basic but there were beds with mosquito nets, a bathroom and access to a kitchen – all we really needed.

After about three hours sleep I woke to the sound of running water. It was pitch dark. Reaching for my phone to use the torch, I put my hand in water. I stepped off the bed into water up to my shins and tried to find my way in the dark to the door, briefly freezing with fear as unidentified floating objects bumped into my legs. Opening the door, I quickly realised that the whole place was now under water and went to wake Justin. Through the glass of the kitchen door, we could see that the water outside was substantially deeper than inside.  Nevertheless, we knew we had to get out quickly in case the water rose more, and with half a mind on potentially dodgy electrics in the building.

We grabbed those belongings that we could find, including my phone which still worked despite having been submerged (all credit to Apple!) and stepped out into waist-deep water. We made for a nearby out-building to place our belongings on to some stacked tables that were still above water and gave ourselves a few minutes to plan our next steps. 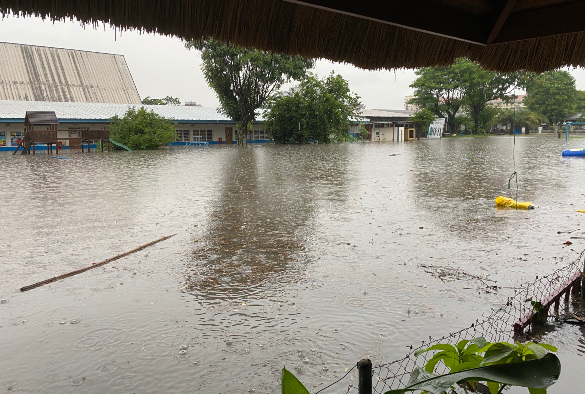 In front of us was now a lake, with some buildings in the distance and not a single person to be seen. No one replied to our shouting. Where was the security guard who only a few hours ago had taken us to our accommodation?  And where was Kathy, an ex-Liverpool PhD student, now at ITM in Belgium, who we were supposed to meet that morning?

In the absence of any better ideas, we decided to head across the lake towards an area that looked as though it might be higher. And so, only five hours after landing in Kinshasa, Justin and I found ourselves wading waist-deep through dirty flood water in an unknown direction, unsure of any hazards that might be in our path.

We came eventually to a school which was partly on higher ground and we were able for the first time to step out of water. Having identified somewhere safe, we then headed back through the water to retrieve our belongings and, during this time, helped some women we heard shouting and, close to them, discovered Kathy in a house that, miraculously, was just above the water line. The house belonged to a male researcher who had left a wardrobe of clothes, which Justin and I gratefully raided while waiting for the flood to recede.

No one had seen flooding like this in Kinshasa for 20 years. Many people lost their houses and their belongings and, according to local and international news, the flood sadly took somewhere between 120 and 160 lives.  In the end Justin and I were lucky, losing only a few, easily replaceable things. But over the last few weeks, the memory of waking up in a dark room filling with water has frequently played on my mind; particularly how poorly prepared I was for any sort of disaster.

We had gone to DRC to kick-off a small project looking at the risks associated with the hunting, preparation and consumption of rodents that host Mpox virus. Understandably, we could not achieve everything we had originally planned. However, in the remaining two days we were able to join the Congolese research team, travel to a village some hours from Kinshasa to talk to a local vet, a hunter and women who prepare bushmeat; and on the final day spent some hours beside the Congo River refining our study design and questionnaire for the local context.

Kinshasa has a poor reputation for a variety of reasons. Nevertheless, it also has a great energy and is a place I hope to return to for more Mpox work or to achieve my life-long ambition of taking the ferry up the Congo River from Kinshasa to the interior. 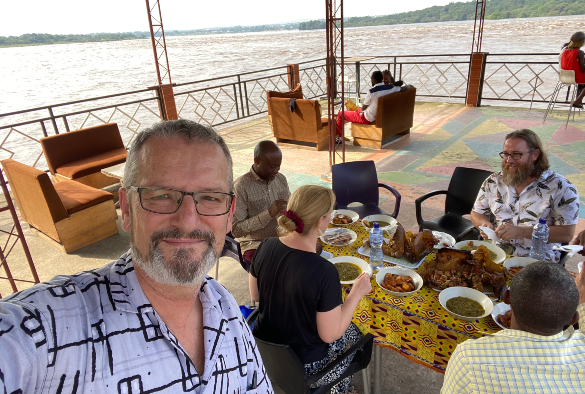 Research meeting and lunch on the River Congo