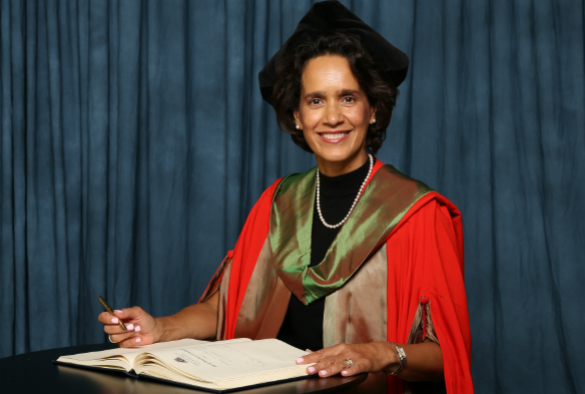 United States District Judge Wendy Beetlestone has been announced as the next Chancellor of the University of Liverpool. She is the University’s eleventh Chancellor and the institution’s first female, and first Black, Chancellor. Wendy succeeds Colm Tóibín, who carried out the role from 2017 until 2022.

An alumna of the University, Wendy was born in Nigeria and educated in Yorkshire. She graduated with a BA (Hons) in Philosophy in 1984, before embarking on a career as a TV journalist, entering the legal profession a decade later. In 2014 she was nominated by US President Barack Obama to serve as a District Court Judge. Her jurisdiction covers both civil and criminal cases involving the US Constitution, US statutes, and diversity cases between citizens of different states.

In 2019, the University awarded Wendy an honorary degree in recognition and celebration of her fearless commitment to fairness and justice throughout her career. As Chancellor, she will be the University’s ceremonial figurehead and will play an important ambassadorial role, locally, nationally and internationally.

Judge Wendy Beetlestone said: “It’s a huge honour to be appointed as Chancellor of the University of Liverpool. As a student here, I gained the skills and thought discipline I use in my professional career every day. I also had a wonderful time, participating in student life and enjoying all this great city has to offer. I’ve remained closely connected to the University since graduating and I’m looking forward to being its ceremonial figurehead and ambassador. I’m also excited about returning to Liverpool to meet our current students and celebrate graduations later this year.”

University of Liverpool Vice-Chancellor, Professor Tim Jones, said: “I am delighted that Wendy has accepted the role of Chancellor of the University of Liverpool. Her outstanding professional achievements, personal qualities and great regard for the University make her an exceptional role model for our students. Wendy shares our values and I know she will be a superb international ambassador for the institution. I’m very much looking forward to welcoming her back to the city and to the University, for graduations this year.”

Liverpool Guild President, Vasiliki Samuels said: “It was a wonderful opportunity to be involved in Wendy’s selection as Chancellor of the University of Liverpool. As an alumna of the University and a past Student Officer, Wendy’s connection and dedication to the University shone throughout and I am elated she has been selected as our first Black, female Chancellor. As the first Black, female President at the Guild I find her journey and international success to be inspiring. On behalf of the Guild, I wish Wendy a warm welcome.”

Wendy was an active student during her time at the University, joining the Debating Society, serving as Editor-in-Chief of the student newspaper, and as Welfare and NUS Officer. On graduation, Wendy was honored to be named an Honorary Life Member of the Guild of Undergraduates. She has remained connected to the institution throughout her career, delivering the University’s annual Law School and Alumni Association Lecture and most recently taking part in the Liverpool Leaders discussion series.

The Chancellor appointment was formally approved by the University’s Council following a nomination process last year.