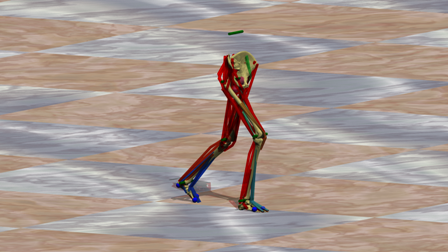 Computer simulation was used to predict the footprints that would have been formed by the likely printmaker, a species called Australopithecus afarensis

Scientists at the University of Liverpool have found that ancient footprints in Laetoli, Tanzania, show that human-like features of the feet and gait existed almost two million years earlier than previously thought.

Many earlier studies have suggested that the characteristics of the human foot, such as the ability to push off the ground with the big toe, and a fully upright bipedal gait, emerged in early Homo, approximately 1.9 million years-ago.

Liverpool researchers, however, in collaboration with scientists at the University of Manchester and Bournemouth University, have now shown that footprints of a human ancestor dating back 3.7 million years ago, show features of the foot with more similarities to the gait of modern humans than with the type of bipedal walking used by chimpanzees, orang-utans and gorillas.

The footprint site of Laetoli contains the earliest known trail made by human ancestors and includes 11 individual prints in good condition. Previous studies have been primarily based on single prints and have therefore been liable to misinterpreting artificial features, such as erosion and other environmental factors, as reflecting genuine features of the footprint. This has resulted in many years of debate over the exact characteristics of gait in early human ancestors.

The team used a new statistical technique, based on methods employed in functional brain imaging, to obtain a three-dimensional average of the 11 intact prints in the Laetoli trail. This was then compared to data from studies of footprint formation and under-foot pressures generated from walking in modern humans and other living great apes. Computer simulation was used to predict the footprints that would have been formed by different types of gaits in the likely printmaker, a species called Australopithecus afarensis.

Professor Robin Crompton from the University of Liverpool’s Institute of Ageing and Chronic Disease said: “It was previously thought that Australopithecus afarensis walked in a crouched posture, and on the side of the foot, pushing off the ground with the middle part of the foot, as today’s great apes do.

“We found, however, that the Laetoli prints represented a type of bipedal walking that was fully upright and driven by the front of the foot, particularly the big toe, much like humans today, and quite different to bipedal walking of chimpanzees and other apes.

“Quite remarkably, we found that some healthy humans produce footprints that are more like those of other apes than the Laetoli prints. The foot function represented by the prints is therefore most likely to be similar to patterns seen in modern-humans. This is important because the development of the features of human foot function helped our ancestors to expand further out of Africa.

“Our work demonstrates that many of these features evolved nearly four million years ago in a species that most consider to be partially tree-dwelling. These findings show support for a previous study at Liverpool that showed upright bipedal walking originally evolved in a tree-living ancestor of living great apes and humans. Australopithecus afarensis, however, was not modern in body proportions of the limbs and torso.

“The characteristic long-legged, short body form of the modern human allows us to walk and run great distances, even when carrying heavy loads.  Australopithecus afarensis had the reverse physical build, short legs and a long body, which makes it probable that it could only walk or run effectively over short distances.  We now need to determine when our ancestors first became able to walk or run over the very long distances that enabled humans to colonise the world.”

Dr Bill Sellers, from the University of Manchester’s Faculty of Life Sciences, said: “The shape of the human foot is probably one of the most obvious differences between us and our nearest living relatives, the great apes. The difference in foot function is thought to be linked to the fact that humans spend all of their time on the ground, but there has been a lot of debate as to when in the fossil record these changes occurred. Our work shows that there is considerably more functional overlap than previously expected.

“The Laetoli footprint trail is a snapshot of how early human ancestors used their feet 3.7 million years ago. By using a new technique for averaging footprints, foot pressure information from modern great apes, and computer simulation of walking in the proposed Laetoli printmaker, we can see that the evidence points to surprisingly modern foot function very early on in the human lineage.”

Professor Matthew Bennett, from Bournemouth University, said: “This unique study, and the methodological approach used, demonstrates the potential power of fossil footprints in providing evidence on the evolution of human gait.  Ancient footprints are rare in the geological record and their interpretation often controversial, but the methods and approaches used in this study bring objectivity to their analysis for the first time.  The study of human footprints has truly come of age.”

The research, funded by the Leverhulme Trust and the Natural Environment Research Council (NERC), is published in the Royal Society journal Interface.