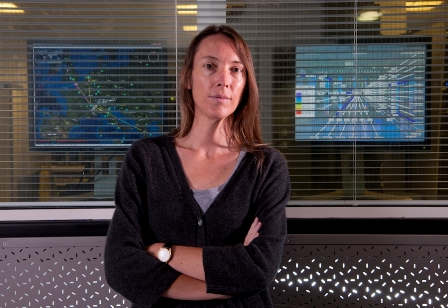 University of Liverpool physicist, Dr Tara Shears contributed to a major BBC2 documentary investigating results from CERN that suggest particles could travel faster than the speed of light.

At the end of September, data from the OPERA experiment, an observation of more than 15,000 neutrinos travelling deep below the earth’s surface, seemed to show nature’s cosmic speed limit had been breached.

The neutrinos appeared to travel at a velocity 20 parts per million above the speed of light, over the 760 kilometres between CERN in Switzerland and Italy’s INFN Gran Sasso Laboratory.

Dr Shears said: “According to the laws of physics, nothing can go faster than the speed of light. If the OPERA results are true this would really shake up science.”

The news rocked the scientific world because the invariance of the speed of light is the cornerstone of Einstein’s 1905 Special Theory of Relativity, a hypothesis tested and retested over a century to the highest levels of precision available.

Sergio Bertolucci said: “If the measurement is confirmed it might change our view of physics, but we need to be sure that there are no other, more mundane, explanations. That will require independent measurements.”

It’s a sentiment Dr Shears echoes, she said: “This is such a delicate and tricky measurement to make that we have to make sure we really understand it before we rewrite anything, and that means checking measurements made with other neutrino experiments, and astrophysical neutrino observations, to get the whole story.”

Professor Christos Touramanis, Head of the Liverpool Neutrino group in the Department of Physics, is at the centre of this process.

Prof Touramanis said: “Liverpool is strategically placed in the efforts to elucidate this great challenge. Our neutrino experiment in Japan, T2K, will definitely repeat the measurement, and the MINOS experiment in the USA will do the same.”

“The OPERA result is not one of those statistical flukes which appear briefly at the early phases of experiments, only to go away as more data is accumulated. It is a statistically robust result, which could suffer from some unknown systematic effect.”

“It is for this reason that repeating the measurement with T2K, MINOS, and maybe future experiments, is the one and only way to clarify the situation and move forward.”

Faster Than the Speed of Light was on BBC2 in October.