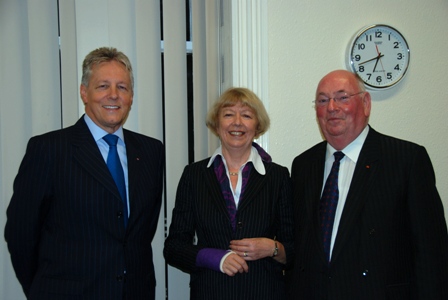 The First Minister of Northern Ireland has given the annual John Kennedy Lecture at the Institute of Irish Studies.

The Rt Hon Peter Robinson MLA was appointed as the First Minister for Northern Ireland in June 2008. He is the leader of the Democratic Unionist Party and was MP for East Belfast from 1979 until May 2010.

Professor Marianne Elliott, Director of Institute, said: “We were very pleased to welcome Mr Robinson particularly given the very important role he has played recently in helping to restore peace to Northern Ireland.”

Mr Robinson’s lecture entitled `Rewriting the script: defining moments on the road to devolution’ was the fourth John Kennedy Lecture in Irish Studies.

Founded in 1988, the Institute of Irish Studies is unique as the national centre of excellence for the study of Ireland in Britain. The Institute is held in the highest regard in Ireland itself, in Britain and further afield, thanks to its role in teaching and researching Irish culture, history and politics. The Institute promotes understanding between the people of Britain and Ireland and contributes positively to today’s improved perceptions of Ireland.