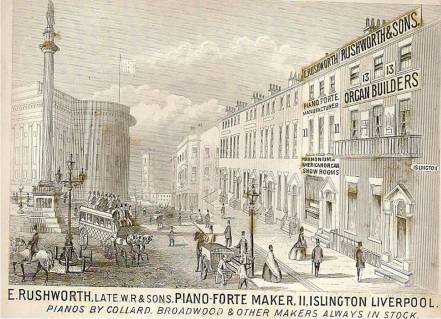 The University of Liverpool is to research and record the history of the famous Liverpool family music business, Rushworths.

The three-year research project will record the history of Liverpool’s long established and largest music business from its formation in 1828 until it ceased operations in 2002. The project will also explore the contribution Rushworths made to the cultural and artistic life of Liverpool.

Jonathan Rushworth, who supports the project through the Rushworths Charitable Trust and is a graduate of the University of Liverpool, said: “Rushworths has played an important role in Liverpool’s social and cultural history. I am sure that there are many Liverpool people who have memories, recollections and experiences of the music premises in Whitechapel and Islington or the organ-building side of the business. “

“Many people may also have experience of the programmes and initiatives which Rushworths organised to support and encourage music in the city. This project is a great opportunity to capture the memories of those who worked for, visited, dealt with or supported this famous Liverpool family music business.”

Rushworths was founded in 1828 by William Rushworth as an organ building business before quickly branching out into selling musical instruments. It became one of the largest organ builders in the UK and made organs for many churches, cathedrals and halls in Liverpool, the UK and overseas including the Philharmonic Hall, Guildford Cathedral and a number of schools and Oxford and Cambridge colleges.

In 1960 the retail business moved from Islington to Whitechapel and became the ‘largest music house in Europe’ comprising five sales floors of musical instruments, televisions, record players and household appliances as well as sheet music and records. Branches of Rushworths could also be found further afield across the North West and North Wales including Birkenhead, Chester, Llandudno, Manchester and the Isle of Man.

Rushworths has a strong association with Liverpool’s long and rich music tradition, in particular with the Merseybeat scene of the early 1960s and the Beatles. Paul McCartney’s first guitar was said to have been bought from Rushworths and in 1962 James Rushworth presented John Lennon and George Harrison with their Gibson J-160E guitars specially imported from Chicago.

Nicholas Wong, who is leading the research project, said: “I am delighted to have this unique opportunity to research arguably Liverpool’s most famous music store. Rushworths was a unique family-run business which over its long history touched and influenced many people. I urge members of the public to get in touch with me to share their memories, materials or experiences of Rushworths music shops and business.”

As well as being a family-owned and run music business, Rushworths also ran a number of programmes and initiatives which encouraged musical talent in young people in the region including the Annual Brass Quartet Contest and the Annual Rushworth Festival of Music & Verse, which later became Liverpool Festival of Music, Drama and Dance. The Merseyside Music Teachers Association helped and encouraged music teachers in the Liverpool Area and in the 1970s and 1980s Rushworth’s Teaching Scheme helped children to learn a musical instrument by renting instruments to parents and arranging tuition by a local music teacher. The William Rushworth Memorial Trust which was set up in 1944 still exists and makes grants for the study and appreciation of music.

2 thoughts on “University to research history of Rushworths music business”