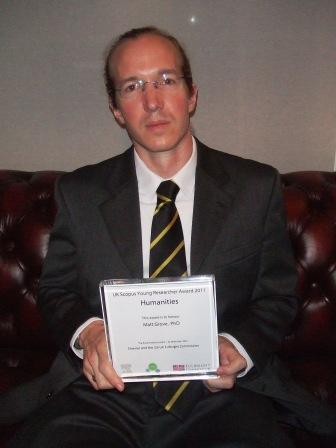 Dr Matt Grove, Lecturer in Archaeology, Classics and Egyptology, has been named Scopus Young Researcher of the Year in Humanities.

The Scopus Awards, the product of a partnership between Elsevier and the UK-US Fulbright Commission, are intended to recognise promising young researchers who have made a significant impact in their fields.

A shortlist of five leading young researchers in each of eight divisions was calculated via the Scopus Citation Database, an acknowledged indicator of ‘research significance’ as outlined in the Higher Education Funding Council for England’s (HEFCE) Research Excellence Framework (REF). Final winners in each division were then selected by a panel of leading experts, led by Professor Michael Arthur, Chairman of the Russell Group.

Dr Grove gained particular praise for the breadth of his work in evolutionary anthropology, on subjects ranging from primate social dynamics and the spatial analysis of prehistoric archaeological sites to the effects of climatic change on patterns of human evolution.

Dr Grove said: “I am delighted to have my research recognised in this way, particularly at a time when we are approaching assessment via the REF, which will be integral to securing future research funding for Archaeology at Liverpool.”

The award was presented at a gala dinner at the Royal Society by Professor Arthur.