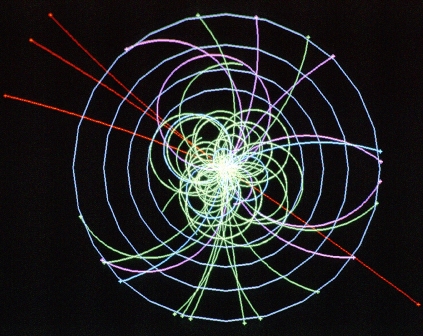 Scientists’ impression of the Higgs boson

Physicists collaborating on experiments at the Large Hadron Collider (LHC) at CERN – the European Organization for Nuclear Research in Geneva – will announce their latest results in the search for the Higgs boson particle on Tuesday 13 December.

The University’s Particle Physics Group has worked on the construction of ATLAS and LHCb – two of the four detectors at the LHC – working closely with engineers and scientists from around the world. Liverpool’s contribution to these detectors was delivered using the Liverpool Semiconductor Detector Centre and Physics Workshops which are central to the Particle Physics Programme.

The team is now involved in analysing the results from the LHC – the world’s highest energy particle accelerator. The LHC works by accelerating two beams of protons to almost the speed of light. The protons collide together 40 million times a second, recreating the conditions of the universe immediately after the Big Bang, and enabling scientists to reconstruct fundamental particles produced at that time.

Since research started at the LHC nearly two years ago, scientists have been working to determine whether the Higgs boson particle exists. The Higgs boson is the final undiscovered particle of the Standard Model of particle physics and is a crucial ingredient in our understanding of the mass of many elementary particles

Scientists from both the ATLAS and CMS experiments at CERN will present their latest findings in the search for the Higgs at a seminar on Tuesday. The findings are based on more than 300 trillion high-speed particle collisions over the past year. The event will be broadcast live here: