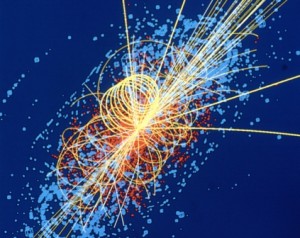 Liverpool physicists playing a major role in the search for the Higgs boson particle say that the latest data from experiments at the Large Hadron Collider (LHC) may have uncovered a ‘keystone in the make-up of the Universe’. In a seminar broadcast world-wide at CERN, the European Organization for Nuclear Research in Geneva and home to the LHC, scientists said the two experiments searching for the Higgs boson – ATLAS and CMS – had shown strong indications that the particle exists within a certain mass range.

The LHC – the world’s highest energy particle accelerator – works by accelerating two beams of protons to almost the speed of light. The protons collide together 40 million times a second, recreating the conditions of the Universe immediately after the Big Bang, and enabling scientists to reconstruct fundamental particles produced at that time.

Professor Max Klein heads up the Liverpool team on the LHC’s ATLAS experiment. Team members, Dr Andrew Mehta and Dr Joost Vossebeld, have played a leading role in the search for the Higgs boson.

Dr Vossebeld said: “Our team pioneered the use of new techniques to reconstruct the Higgs which have allowed ATLAS to zoom in on the mass region containing the possible signal and exclude a wider search area. We’re proud to have contributed to the results presented. Although we have more work to do, if these results are confirmed, we may be able to announce a discovery within a year.”

Professor Themis Bowcock, Head of Particle Physics, said: “The CERN results on the Higgs boson have the scientific world agog. Have they or have they not seen the elusive particle sometimes called the God Particle? First proposed in the 1960s, this particle plays a crucial role in the evolution of the Universe from the Big Bang to the way we see it today.

“Our understanding of nature and its fundamental forces is known as the Standard Model. For the last 40 years it has allowed us to understand phenomena such as light, the way the sun burns, and how atoms and nuclei are held together.

“The Standard Model relies on a particle called the Higgs boson which interacts with other particles making some very heavy whilst leaving others light. This shapes the Universe we know today. However to date no-one has found direct evidence of the Higgs.

“The ATLAS and CMS experiments at the LHC have come as close as anyone to observing the Higgs and now both have presented small but significant signals. It is possible that each observation is simply a statistical fluke, a fluctuation in the background, mimicking a Higgs signal. But the fact that ATLAS and CMS independently agree on the possible Higgs mass substantially increases the overall significance of the results.

“If the Higgs observation is confirmed, through analysis of data to be collected next year, this really will be one of the discoveries of the century. Physicists will have uncovered a keystone in the makeup of the Universe – one whose influence we see and feel every day of our lives.”

The University’s Particle Physics Group has worked on the construction of ATLAS and LHCb – two of the four detectors at the LHC – working closely with engineers and scientists from around the world. Liverpool’s
contribution to these detectors was delivered using the Liverpool Semiconductor Detector Centre and Physics Workshops which are central to the Particle Physics Programme. 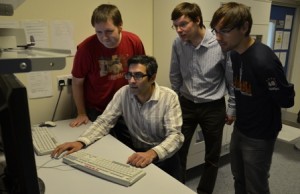