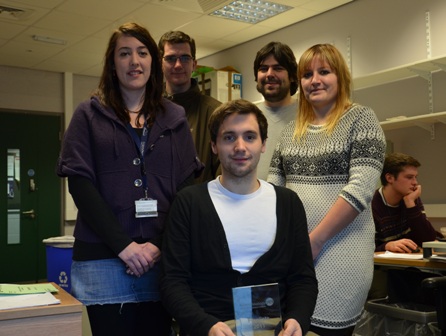 PhD students from the Institute of Integrative Biology scooped a prestigious Biotech YES award after taking a novel idea – to transform waste plastic into ethanol – all the way to the national finals.

Simon West, Jen Kelly, Ben Wareham, Jane Pulman and Damon Daniels all impressed judges with the strength of the intellectual property (IP) vision for their product, and company, Synthetica.

They picked up £250 for ‘best consideration of IP strategy’ at the competition, which aims to raise awareness of the commercialisation of bioscience ideas among postgraduate students and scientists.

Simon West, who led the group, said: “It was great, very stressful at times and time intensive but it was good fun.”

Biotechnology YES – which stands for Young Entrepreneurs Scheme – is organised jointly by the Nottingham Institute for Enterprise and Innovation (UNIEI) and the Business and Innovation Unit at the Biotechnology and Biological Sciences Research Council (BBSRC).

The team took its place in the London finals after being one of only two to make it through the northern regional round, held at Old Trafford.

They then had to present their idea to a panel of venture capitalists at London’s County Hall, and make the case for further investment.

Simon and the team were asking for £3million to continue developing an idea which sees a specific bacteria degrade waste plastic into ethanol. The biofuel produced could then be used, and the team’s vision was to upscale production until it reached a point where it could be licensed to the petrochemical industry.

Jane Pulman, who aspires to become a patent attorney, said: “Everyone had gone to some effort with the IP, whereas we had a strategy. We had thought about how to protect, and when to file to get maximum protection. It wasn’t just about having a good product, it was about our protection as well. It showed we were thinking about our industry partners.”

And the team are keen to extol the benefits of being involved in the process.

Damon Daniels added: “We made some great contacts, it’s good for the CV and the BBSRC is really pushing it. It makes you feel that you’re not just doing a degree of PhD, that it’s all going somewhere.”