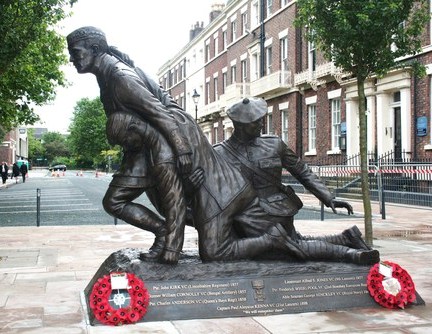 Abercromby Square is to become the permanent home for the Liverpool Heroes Memorial which commemorates Captain Noel Chavasse VC & Bar MC, the only man to be twice awarded the military’s highest award for valour, the Victoria Cross, in the First World War and fifteen other Liverpool-born Victoria Cross recipients.

Designed by local sculptor, Tom Murphy, the bronze statue depicts Captain Chavasse and a Liverpool Scottish stretcher bearer attending a wounded soldier and is referred to locally as the ‘Chavasse Statue’.

Bill Sergeant, from the Noel Chavasse VC Memorial Association which gifted the statue to the University and will support its upkeep, said: “The statue provides brave men of the city who lost their lives in the two world wars with the recognition and gratitude they so richly deserve. Abercromby Square is a great location for people to come and see the statue and our memorial service will still be held here every year too.”

In 1916, as a surgeon-lieutenant, Chavasse rescued wounded men from no-man’s land under heavy fire, sometimes just 25 yards from enemy lines. He saved the lives of more than 20 men and was honoured with his first Victoria Cross. He was awarded the second posthumously after he continued to rescue and treat men during conflict at Wieltje, Belgium, though mortally wounded himself. Captain Chavasse died on 4 August 1917, at the age of 32, and is buried at Brandhoek New Military Cemetery in Belgium.