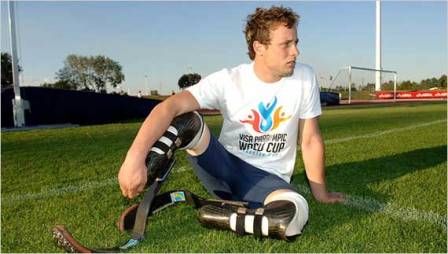 Research by the University of Liverpool predicts that the rise of human enhancement and prosthetics could lead to the end of a separation between Olympic and Paralympic competitions.

Dr Beatriz Garcia, from the University of Liverpool, and Professor Andy Miah, from the University of the West of Scotland, say that the rise of human enhancement and prosthetics is rapidly changing the rules of the Games. This is blurring the agreed view of what constitutes an unfair advantage for an athlete and could lead to the merger of the Olympic and Paralympic competitions.

Dr Garcia said: “Paralympians like Oscar Pistorius signal the rise of athletes whose biology is given a boost by technology. He is the first of a coming generation of athletes who will challenge the legitimacy of separating the Paralympics from the Olympics. We envisage that in 50 years, people will prefer to watch prosthetically enhanced Paralympic sport. The Olympics will seem far too primitive by comparison. This will dramatically change society’s approach to disability. The Games also contribute to breaking the perceived boundaries between abled and disabled bodies by presenting a joint cultural programme that brings the disability arts movement into the mainstream and forces us to blur distinctions between abled and disabled artists.”

The researchers also predict that London 2012 will be the first ‘Twitter Olympics’ and a showcase for ‘citizen journalists’ using their mobile devices to share their Games experiences worldwide. The rise of social media will have future implications for the Olympic games financial base, as traditional broadcasting media battle to retain control of their exclusive content agreements.

The researchers explore the most critical issues facing the Olympic games in a new publication The Olympics: the Basics. The rise of the Games as a commercial entity leads the authors to call for the implementation of a term length for Olympic sponsors to avoid over-commercialisation and the corrupting influence of exclusive partnerships. They also argue for the formation of International Cultural Federations to more effectively stand up to the dominant sports industries, as they argue the Olympics is not just about sport.

Dr Garcia has undertaken research at six Olympic Games and notes: “The Olympic Games have been overwhelmed by the sports industries but, while the athletes are the heart of the Games, the Olympics also need other vital organs to function. Education and culture are those organs, but to really shape the Olympics they need to re-organise and, especially, create an infrastructure of knowledge transfer that operates from one Games to the next”

She added: “We hope this research will fill in the gaps for many people, as they are overwhelmed with mostly official Olympic messages. The publication is written for general interest, covering all dimensions of the Games, and aims to reach beyond academia. People need to know what is about to happen here in the UK, beyond what they are told through the official Olympic channels. Our book aims to put 2012 in context and highlights radical changes ahead for future Games editions.”

The Olympics: the Basics presents new insights into the controversies and the legacy of the Olympics, drawing attention to the, sometimes, forgotten origins of the modern social movement. It describes how the Olympics transcend sports, engaging with a range of contemporary philosophical, social, cultural and political matters.

Further information regarding The Olympics: the Basics is available at: www.olympicsbasics.eu