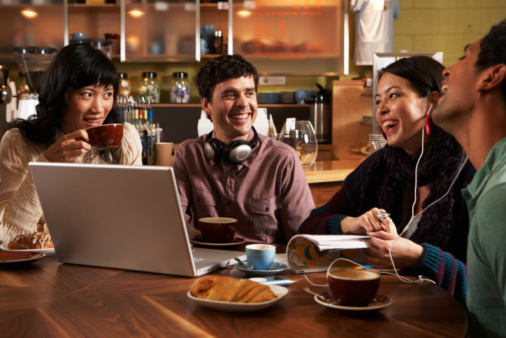 Research carried out by scientists at the University of Liverpool suggests there is a link between the number of friends we have and the size of the region of the brain – known as the orbital prefrontal cortex – that is found just above the eyes.

A new study shows that this brain region is bigger in people who have a larger number of friendships. The study suggests that we need to employ a set of cognitive skills to maintain a number of friends.

These skills are described by social scientists as ‘mentalising’ or ‘mind-reading’– a capacity to understand what another person is thinking, which is crucial to our ability to handle our complex social world, including the ability to hold conversations with one another. This study, for the first time, suggests that our competency in these skills is determined by the size of key regions of our brains and in particular, the frontal lobe.

The researchers took anatomical MR images of the brains of 40 volunteers at the University’s Magnetic Resonance and Image Analysis Research Centre to measure the size of the prefrontal cortex, the part of the brain used in high-level thinking. Participants were asked to make a list of everyone they had had social, as opposed to professional, contact with over the previous seven days. They also took a test to determine their competency in mentalising.

Dr Joanne Powell, from the University’s Institute of Psychology, Health and Society, said: “Perhaps the most important finding of our study is that we have been able to show that the relationship between brain size and social network size is mediated by mentalising skills. What this tells us is that the size of your brain determines your social skills, and it is these that allow you to have many friends.”

Professor Robin Dunbar, from the University of Oxford’s Institute of Cognitive and Evolutionary Anthropology, said: “Mentalising is where one individual is able to follow a natural hierarchy involving other individuals’ mind states. For example, in the play ‘Othello’, Shakespeare manages to keep track of five separate mental states: he intended that his audience believes that Iago wants Othello to suppose that Desdemona loves Cassio [the italics signify the different mind states]. Being able to maintain five separate individuals’ mental states is the natural upper limit for most adults.

“We found that individuals who had more friends did better on mentalising tasks and had more neural volume in the orbital frontal cortex, the part of the forebrain immediately above the eyes. Understanding this link between an individual’s brain size and the number of friends they have helps us understand the mechanisms that have led to humans developing bigger brains than other primate species. The frontal lobes of the brain, in particular, have enlarged dramatically in humans over the last half million years.”

The study is published in the journal, Proceedings of the Royal Society B.

The Lucy to Language Project aims to explore how the early hominid brain evolved from its essentially ape-like beginnings among the earliest australopithecines (around 3.5 million years ago) to the modern human potential of the Upper Palaeolithic Revolution (around 50,000 years ago) and its final expression in the dramatic social and economic changes of the last 10,000 years. It is funded by a seven-year programme grant awarded by the British Academy.

2 thoughts on “Could brain size determine whether you are good at maintaining friendships?”