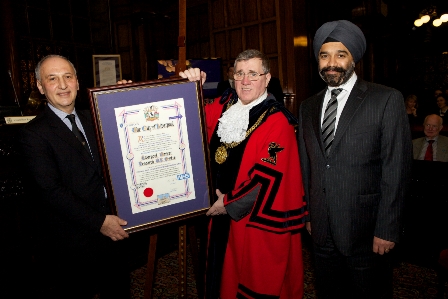 Liverpool Cancer Research UK Centre, based at the University, has been granted the Freedom of the City of Liverpool.

The Centre has been admitted to the Freedom Roll of Associations and Institutions of the City of Liverpool in recognition for its extensive research into treatment for cancer sufferers in the region and beyond.

Liverpool’s Lord Mayor, Councillor Frank Prendergast, said: “Awarding the Freedom of the City is the highest honour we can bestow, and the Cancer Research UK Centre is a most deserving recipient.

“Those working tirelessly to find a cure for cancer have made and continue to make a huge difference to the lives of many people. Their commitment and drive cannot be commended highly enough.

“2012 is Liverpool’s Action on Cancer Year, backed by the Council and Liverpool PCT, and Cancer Research UK’s tenth anniversary. I can think of no better time to reward the efforts of those working in the Cancer research field.”

The Liverpool Cancer Research UK Centre brings together scientists, doctors and nurses to boost key areas of research that will produce the greatest benefits for cancer patients in Liverpool, Merseyside and Cheshire. The Centre also focuses on tackling cancer in low income communities in the region, where more people die from the disease.