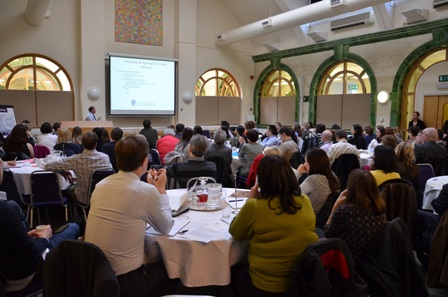 More than 100 scientists attended the Institute of Ageing and Chronic Disease’s (IACD) Annual Away Day, reflecting an impressive period of growth.

The event, which brought staff and students together from IACD’s three major research groups, came hot on the heels of the announcement of major funding for the UK’s first Centre for Integrated Research into Musculoskeletal Ageing.

Held in the University’s Foresight Centre, the day began with an introduction from IACD Head of Institute, Professor Malcolm Jackson and Institute manager, Tom West, before Dr Eithne Comerford and Sue Jones delivered an insight into current postgraduate programmes.

This was followed by a musculoskeletal research overview from Professor John Innes and rising star, Dr Liz Laird, who talked about her research into age-related fibroses. Professor Simon Harding then delivered an update on developments in Department of Eye and Vision Sciences, introducing Dr Yalin Zheng.

Professor Anne McArdle spoke of the Institute’s “vast expertise in musculoskeletal biology” and the “wide array of technologies” available, before introducing Giorgios Sakellariou, who was handpicked from the post-doctoral programme to explore his current research into the mechanisms by which ageing leads to weakness in the elderly.

Professor John Wilding spoke of the Department of Obesity and Endocrinology’s increasingly vital role, as the country faces an “obesity epidemic”.

He was joined by colleague Dr Dan Cuthbertson who elaborated on research being carried out into non alcoholic fatty liver disease.

Dr Cuthbertson said: “If you look at weight and BMI, it doesn’t tell the whole story. What we are now beginning to look at is patients with normal weight who have a number of the complications associated with obesity, like hypertension and fatty liver disease, that you wouldn’t predict they would have by their weight. The flip side of this is a significant proportion, around 30%, despite significant obesity have very few of the complications you would expect to see.”

IACD Director, Professor Malcolm Jackson said: “We cover an area in which there is a lot of interest, because of the changing demographics of the population. The number of elderly people is increasing dramatically and a lot of funding is going into understanding the health effects of ageing. Our research is key to that.” 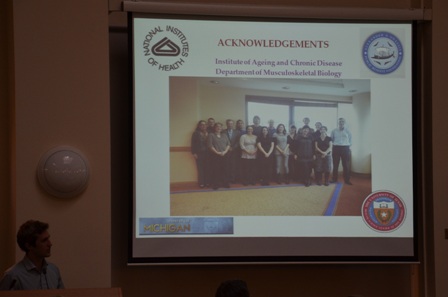