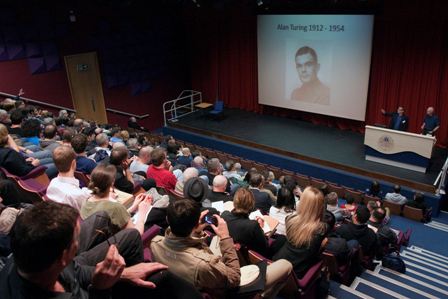 Best-selling author Paul Gannon has spoken at a public lecture in honour of Alan Turing, one of the most influential British scientists of the 20th century.

The lecture, hosted by the Staff & Postgraduate Lesbian, Gay, Bisexual and Trans (LGBT) Network and the School of Histories, Languages and Cultures as part of LGBT History Month, commemorated the centenary of the birth of Alan Turing.

In 1937, Turing defined a mathematical concept of computing which forms one of the most important theoretical foundations of modern computer science and during the Second World War, he was the top British codebreaker at Bletchley Park where he led the breaking of the German Enigma cipher machine.

He also contributed to several other code breaking projects at Bletchley, including work on another, more secret and more complex cipher machine, the Geheimschreiber, used by Hitler and the German Army High Command. This project led to the development of Colossus, the world’s first large scale electronic computing machine. The defeat of Enigma and the Geheimschreiber is estimated to have saved millions of lives by shortening the war by about two years.

Alan Turing: Triumph and Tragedy covered Turing’s war work at Bletchley Park, his move to Manchester University where he worked on the first stored program computers and his important contribution to the field of biological morphology, concluding with the events which led to his tragic suicide following his prosecution and punishment by chemical castration for his homosexuality.

Speaker, Paul Gannon, is the author of six books including Colossus: Bletchley Park’s Greatest Secret and Inside Room 40: The Codebreakers of WWI. He recently appeared in the BBC2 documentary Codebreakers: The Lost Heroes of Bletchley Park.

Dr Andy Heath, Chair of the LGBT Network, said: “This lecture was the first of the Network’s ‘Flagship’ public events which aim to engage people from across the University and wider community with a variety of LGBT themes”.

The next public lecture in the series is on Thursday 17 May at 1pm in the Sherrington Building, with speaker Professor Michael King, University College London, who will talk about the global phenomena of homophobia and why it has existed in nearly every society through history.

Until Saturday 19 May visitors to the Victoria Gallery & Museum can see the Pink Brick exhibition which charts the history of lesbian, gay, bisexual and trans people at the University of Liverpool from the early 1960s to the present day.