Scientists at the University are developing a test for nuclear materials that could prevent the construction of atomic weapons and ‘dirty bombs’.

Governments are increasingly concerned about the availability of radioactive and nuclear material in countries with weak or ineffective control systems – particularly around areas of production, reprocessing, storage and transportation. The £3 million international MODES-SNM project, funded through the European Union under EU FP7, will deliver a prototype mobile detection system to reduce the risk of radioactive and nuclear materials being used for terrorism.

The cycle of activities in power and research reactors in both the civil and defence sectors produce Special Nuclear Material (SNM), including plutonium, which can be used for the construction of atomic weapons and dirty bombs. The project aims to ensure SNM remain out of reach of individuals and groups who might attempt to use them illegally.

Professor Christos Touramanis from the University’s Department of Physics, said: “Current systems to detect SNM have a number of limitations. Materials tend to be smuggled inside commercial containers and special enclosures inside can minimise the escaping tell-tale radiation. The system we’re developing will rely heavily on noble gas detection modules supported by robust, lightweight electronics and intelligent analysis algorithms, integrated in portable units that can be used by security personnel at ports of entry.”

Plutonium emits neutrons of high energy and detection systems work by picking up on this tell-tale ‘signature’. Neutron detection, however, has traditionally relied heavily on Helium-3, an isotope which is becoming scarce, and expensive to use. The University is developing noble (inert) gas sensors which will detect neutron emissions and sit at the heart of the new system. The detectors can be made efficient in small systems and robust for security forces to carry in the back of a car and use wherever required.

The work, which forms part of the University’s research in the area of Security and Conflict, draws upon the University’s expertise in the development of particle detectors, both for fundamental science in experiments like the Large Hadron Collider at CERN and in applications in the areas of homeland security and medical physics. 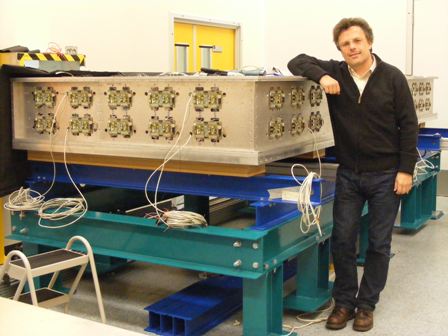