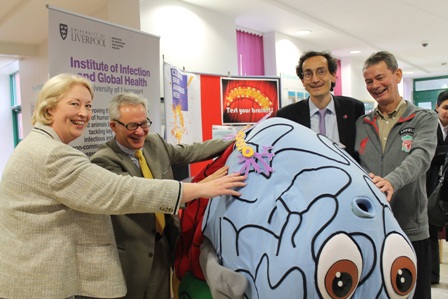 The Institute of Infection and Global Health (IGH) embarked on its “biggest public engagement exercise yet” to mark Brain Awareness Week, culminating in the launch of its Saturday Science programme at the World Museum.

IGH Director, Professor Tom Solomon and colleagues were joined by campaign mascot, ‘Bella the Beautiful Brain’ at a series of events across Merseyside, to create interest in their research and reveal how and why brain infections affect humans.

The week started at Aintree Hospital and included showcases around campus, as well as The Walton Centre, Alder Hey Hospital and the Royal Liverpool Hospital, ahead of the massively popular roadshow, Battling the Brain Bugs, at the World Museum.

Professor Tom Solomon said: “It’s all gone very well and has been our biggest public engagement exercise yet. The rolling roadshow has been into all the most important centres and biggest hospitals. We were a little bit hesitant about whether people would engage and be interested but we were really helped by Bella. Children and adults were interested in learning about the brain, how it works, and what goes wrong when people have brain infections.”

Mike Graham, Education Manager at the World Museum, said: “The Saturday Science Programme went down a storm. We think about 1,800 of the 2,500 visitors to the museum visited the exhibit. Bella the Beautiful Brain and Gloria the Globe really helped draw people in.”

Infections of the brain, such as meningitis, encephalitis and HIV, have a significant impact on large numbers of people in the UK and overseas. The IGH team study how such viruses spread and cause disease, as well as how to improve detection, develop treatments, and prevent infection in the first instance.

Professor Solomon said: “I think it’s important people know about the research we do. A lot of it is publicly funded, so we have to be able to explain what we are doing, and why. It’s also vital for us to know what the public thinks is important to them, in terms of health, and to understand what their priorities are. It’s great to know what people think because it helps drive it all forward.”

IGH academics also appeared on Radio Merseyside throughout the week to discuss their work and Professor Solomon joined Olympic swimmer, Rebecca Adlington to open a new Encephalitis centre in Yorkshire. 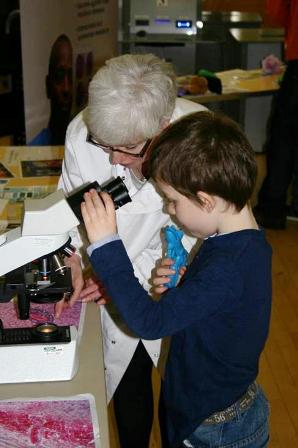 The Saturday Science programme, at the World Museum, “went down a storm”