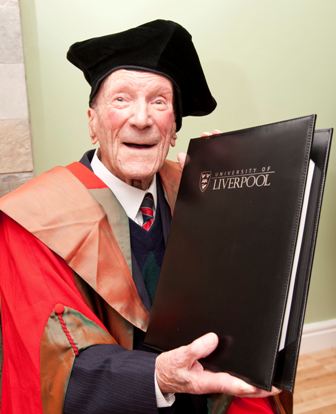 Hugh Greenwood OBE, a retired Liverpool businessman, and supporter of the University, has been awarded an honorary degree in recognition of his charitable services to medical research.

Hugh, who turned 100 in March, is Chairman of the Liverpool-based Children’s Research Fund, which he founded in 1962, and has donated generously to children’s medical research across the UK.

His support for children’s research began when, as a prominent businessman in property and construction, he made a substantial contribution to the building of the Institute of Child Health in London.

He went on to fund the building of the Institute of Child Health at Alder Hey in 1969 and the refurbishment in 2007.

Professor Kelvin Everest, the Public Orator, said: “Hugh has always given special consideration to research at the University and has regularly contributed to clinical and experimental research by members of the University, including paediatric surgery, neonatal medicine, and paediatric medicine.

“His donations have made a material contribution to improving, and saving, the lives of sick children in the city, and his vision and generosity of spirit in making possible major capital developments has ensured that the University’s activity in medical research has enabled more general benefits for sick children everywhere.”

The ceremony took place at Hugh’s home with the Vice-Chancellor, the Public Orator, Pro-Chancellor and Academic Secretary all in attendance.