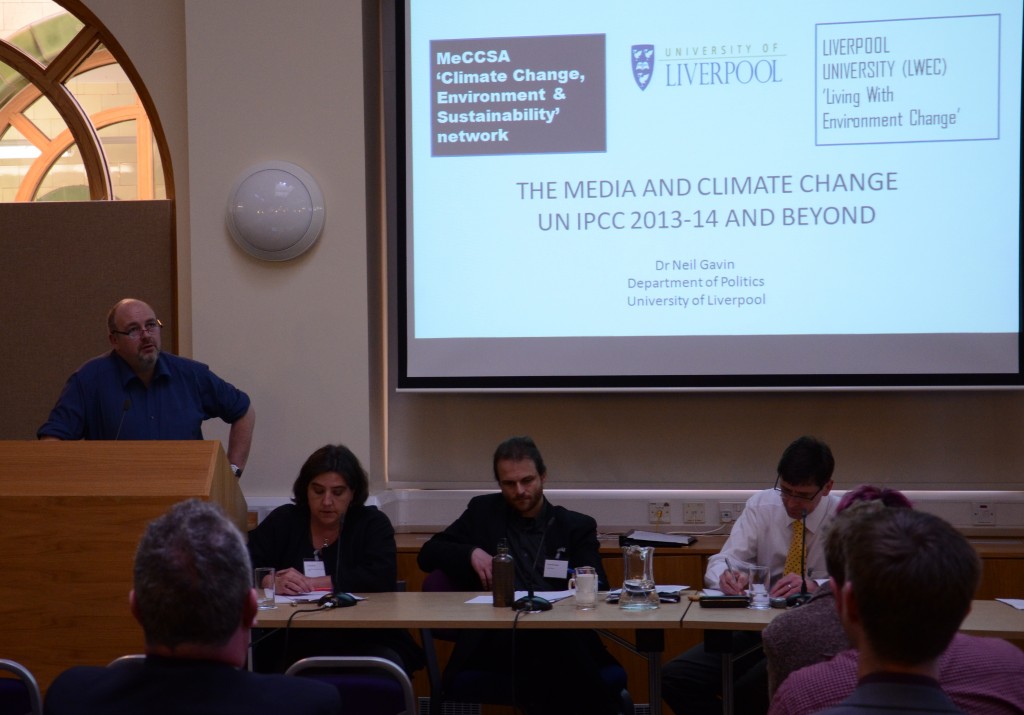 A researcher in communications and politics, Dr Gavin’s recent work has focused on climate change, and its coverage by broadcasters, newspapers and online.

Dr Gavin told the audience, gathered for the symposium entitled ‘Reaching the Public on Climate Change’, that the press retains the “capacity to change what the public thinks is a significant issue for the country”, and so it remains vital researchers continue to engage with the media, even when it appears sceptical or other subjects seem more urgent.

Richard spoke of the difficulty environment correspondents often have convincing editors of the importance of their stories, particularly when headlines are dominated by what appear to be more pressing matters, like the economy or terrorism.

Richard said: “In most organisations there is a hierarchy of correspondents. On top are home affairs matters; crime, justice, the economy, then Westminster, health and education, with science at the bottom of the bulletin. What changed that for environment correspondents was Tony Blair at Gleneagles, when he made Africa and climate change priorities for the UK presidency of the G8. What Tony Blair did was get Westminster correspondents interested in climate change.”

Richard says this renewed interest was damaged by what became known as ‘climategate’ – allegations of manipulated data – and the impact of the Copenhagen Climate Change conference in December 2009. The public struggled to understand a concept, still referred to widely as ‘global warming’, against a backdrop of world leaders shivering through a Scandinavian winter.

Richard said: “What we saw after that was a number of editors convinced climate change was a ‘scam’. One member of the press talks about being cold-shouldered by editors and being accused of wasting time and resources to get on air. We were back at the end of the bulletin, if at all.”

Richard said the subject often suffers from appearing “boring”, and spoke of the challenges facing the traditional media as staff numbers are cut. But he encouraged researchers and academics to come up with innovative information to keep the issue on the agenda.

Richard added: “It is intrinsically difficult to try and get people interested in climate change because many of the most significant impacts are in the future, and exist in other countries. There is a lot of room for doubt, and a very sophisticated lobby exploits that doubt.”