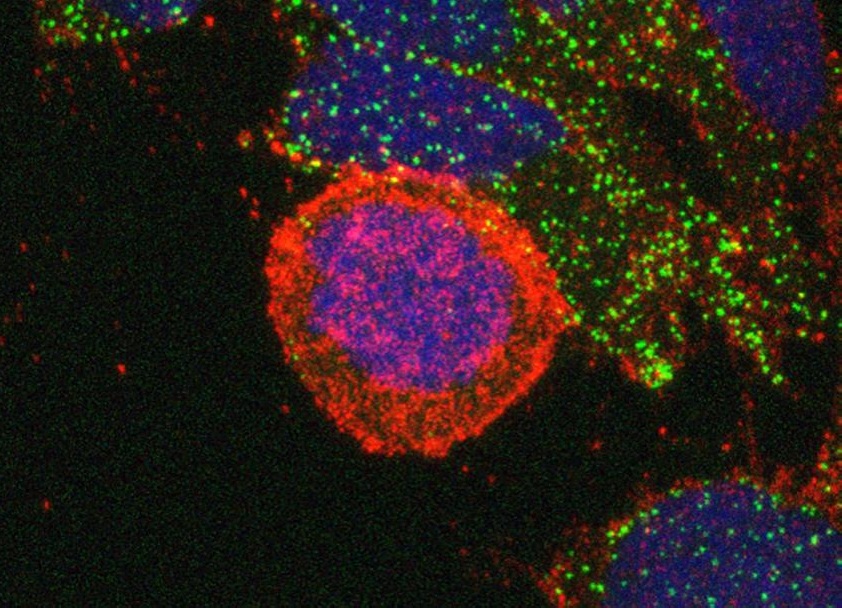 University of Liverpool researchers have resolved the debate over the mechanisms involved in the shut-down process during cell division in the body.

Research findings, published in the journal PNAS, may contribute to future studies on how scientists could manipulate this shut-down process to ensure that viruses and other pathogens do not enter the cells of the body and cause harm.

Previous research has shown that when cells divide, they cannot perform any other task apart from this one.  They cannot, for example, take in food and fluids at the same time as managing the important process of dividing into ‘daughter cells’ to replicate the body’s genetic information.  Cells, instead, shut-down the intake of food and fluid during cell division and for many years it was thought that they did this by preventing a vehicle – called a receptor – from transporting nutrients through the cell membrane.

In recent years scientists have shown evidence to suggest that this theory may be wrong.  Scientists have argued that the cell does not shut down the mechanisms that allow food and fluid to enter the cell as previously thought, but rather the receptors that transport this fuel are absent altogether during cell division, allowing the cell to focus on the one task of dividing.

Studies at Liverpool, however, have now shown that the original theory, first documented in 1965, is accurate.  The receptors are present and able to transport food and fluid during cell division, but the mechanism that allows them through the membrane of the cell shuts-down until cell division is complete.

Dr Stephen Royle, from the University’s Institute of Translational Medicine, explains: “We know that cells in the body do not have the ability to multi-task during cell division.  It can only focus on the job of dividing and not on other important tasks such as uptake of nutrients.  If we think of the cell membrane like a dock at a port and the receptors as a boat delivering cargo, we have shown that the boat, or receptor, is present but the dock, or membrane, does not allow it to unload or go any further.

“Viruses and pathogens use the same route into cells as nutrients, so the next stage of this work is to identify the trigger for this shut-down process, so that we understand whether this on/off switch can be manipulated to prevent harmful infections passing through the cell membrane.  This is a long way in the future, but this work puts us closer to understanding how the cells in the body work.”

The work was funded by the Biotechnology and Biological Sciences Research Council (BBSRC).