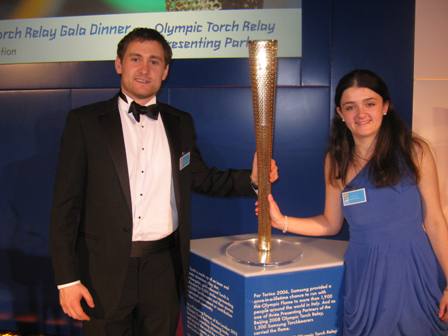 A member of staff and two students have been chosen to carry the Olympic flame as it travels through the city in June.

The three torchbearers, chosen in recognition for their hard work and commitment to the community, are Professor Tom Solomon, Head of the Institute of Infection and Global Health, Maggie Hayes, from the School of the Arts, and Chris Thompson, a PhD student in the Institute of Translational Medicine.

On Friday June 1, they will each carry the Olympic torch through Liverpool, in a live televised event, as it travels between Bolton and the Isle of Man on its 70 day journey before the start of the London 2012 Olympic Games. To celebrate the occasion, University Square will host a celebratory festival involving staff and students.

Professor Solomon’s research into the life threatening brain disease, encephalitis, impacts in the UK and across the world. A video on You Tube of his unusual training regime for the London marathon in 2010 resulted in him becoming known as the ‘Running Mad Professor’. He went on to receive the Guinness world record for running the fastest marathon dressed as a doctor, raising money and awareness for the Encephalitis Society. 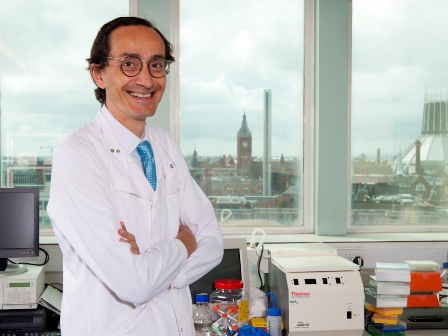 Tom said: “I am delighted and honoured to be one of the torchbearers representing the University of Liverpool in the London 2012 Olympic Torch Relay. Although on this occasion I won’t be wearing my `Running Mad Professor’ outfit, I hope that as many people as possible will come to watch the event and I encourage them all to support me by wearing white coats and stethoscopes!”

Maggie Hayes, a third year English student, is one of the most active members of the University of Liverpool Guild of Students with a passion for volunteering. She has completed Global Xchange placements in Wales and India as well as working on the ‘Community Rep Scheme’, which forges links between local residents and University students. Maggie received an `Eagle award’ from the Guild of Students in 2011 for her commitment and will also be a London Ambassador during the 2012 Games.

Since he came to Liverpool in 2005, Chris Thompson has invested a great deal of time and energy encouraging students to play sport. He is passionate about rugby and has been involved in developing the University rugby competition, coaching the women’s rugby club and refereeing in the local community. In recognition of his passion and commitment, he was awarded the National Student Rugby Volunteer of the year award in 2010.

The University representatives are part of Samsung’s nomination programme and make up part of the 8,000 torchbearers who will carry the Olympic Flame across the UK. Starting in Land’s End on 19 May 2012, the Olympic Flame’s journey will reach more than 1,000 cities, towns and villages across the UK, with 95% of the UK population being within one hour’s distance of this historic event. The Olympic Flame will finish its epic route and arrive at the Olympic Stadium in London on 27 July 2012 to mark the start of the Olympic Games.

The London 2012 Olympic Torch Relay teamed up with 31 university partners across the UK to find individuals who always go the extra mile and reflect the core value of the Olympic movement and the rich heritage of each institution.

For the full Olympic Torch Relay route, click here and to learn more about some of Samsung’s other successful Torchbearers visit: www.samsung.com/uk/london2012.

One thought on “Carrying the Olympic torch”