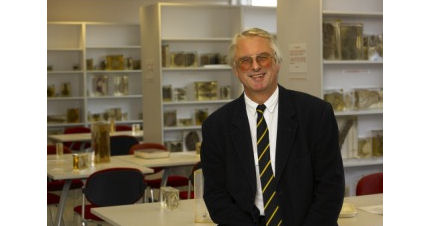 Sandy Trees, Emeritus Professor and a world expert in Veterinary Parasitology, is to be made a life peer.

A former President of the Royal College of Veterinary Surgeons and former Dean of Veterinary Science at the University, he is only the second vet to be appointed to the House of Lords. Funded by over £15 million of external grants, he has produced 140 scientific papers and made major contributions to human and animal health through his research into a variety of parasitic diseases in temperate and tropical areas.

Together with colleagues at the University, Professor Trees has furthered understanding of the role of the parasite Neospora caninum in bovine abortion worldwide and made major contributions to the development of drug treatment for onchocerciasis or River Blindness. Using a bovine model of human onchocerciasis, his research group, in collaboration with colleagues in Germany, were the first to show that antibiotic treatment could kill adult filarial nematodes – worms transmitted by flies which cause a number of diseases in humans and animals in warm climates, including River Blindness.

The announcement of Professor Trees’ appointment as a non-party-political peer was made today by the House of Lords Appointment Commission.

Professor Trees said: “I am hugely honoured and delighted to have been appointed to the House of Lords. It is a particular privilege to be only the second vet to be appointed and I am very grateful for the support of the British Veterinary Association and the Royal College of Veterinary Surgeons throughout the selection process. I look forward to contributing to the work of Parliament across a range of areas including education, science and technology, international health and development as well as veterinary matters.”

Professor Trees qualified from Edinburgh’s Royal (Dick) School of Veterinary Studies in 1969. Following a research expedition to Kenya and a year in general practice, he completed a PhD on bovine babesiosis before working at Elanco (Rome) as veterinary advisor for their Middle-East/North African operations.

One thought on “Life Peerage for Emeritus Professor”