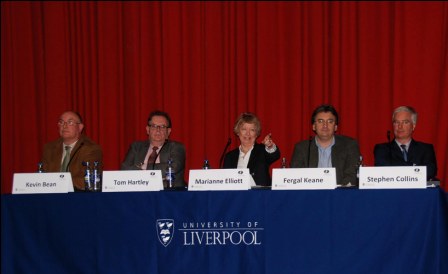 Prof Marianne Elliott: “Irish re-unification is no longer the simple idea of removing the border”

The Institute of Irish Studies brought together a distinguished panel of experts to discuss Irish re-unification.

Fergal Keane spoke of the complexity of history and identities in Ireland, a diversity not usually given enough attention in debates about territorial re-unification.  The stereotypical definitions of Irishness or Britishness were no longer seen as helpful models. Nor was the idea valid that all northern Catholics generally sought re-unification, with some influential surveys since the Good Friday Agreement showing growing level of comfort with the existing order than the reverse.

Tom Hartley spoke of the paradox of the growing involvement of the southern state in the affairs of the north running alongside a partitionist discourse that pushes the six northern counties beyond the historical narrative of the Irish nation.  He described his party’s involvement in politics on an all-Ireland basis and the reality of north-south economic co-operation which renders the border meaningless.

All panel members were agreed on the issue of economic and business unity.

Stephen Collins also spoke of partitionist mentality in the South.  He said Irish re-unification was fine provided it cost nothing and did not result in altering their culture.  He pointed to the strong anti-northern sentiment expressed during Martin McGuinness’s recent campaign for the Irish presidency.

Kevin Bean addressed some of the issues raised by the others, arguing that changing ideas of the nation in the modern world had emerged during the peace process in Ireland and were feeding into the debate.

Professor Marianne Elliott, who chaired the discussion, said: “The fact that there is a civilised debate on Irish re-unification these days, without people killing each other in its pursuit or resistance, reflects the spirit in which the discussion was held.”

“The event attracted an audience of nearly 300 people and the lively debate that followed there was general agreement with the key issue raised by the speakers: that Irish re-unification was no longer the simple idea of removing the border.  Rather a new idea of Irishness required exploring, one that also embraced British identities on the island.”