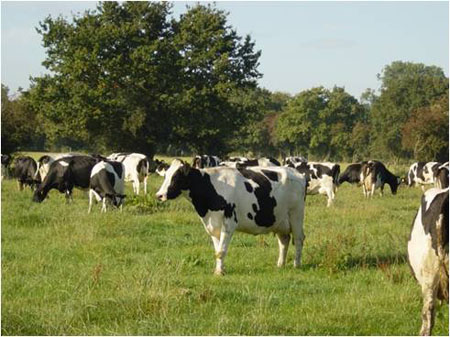 Research at the University suggests the failure of the current bovine tuberculosis (TB) eradication programme could be partly due to a parasitic infection that hinders the tests used in cattle to diagnose bovine TB.

Bovine TB is a bacterial disease that in 2011 resulted in the slaughter of approximately 25,000 cattle in England, at a cost to the country of more than £90 million.  Solutions for eradicating the infection have included badger culling, but new research, published in Nature Communications, now suggests that the spread of the disease may also be due to problems in diagnosing TB in cattle infected with the common livestock parasite, liver fluke.

In a study of more than 3,000 dairy herds in England and Wales, scientists at Liverpool, in collaboration with the Agri-food and Biosciences Institute, Stormont, and University College Dublin, found that liver fluke infection reduces the sensitivity of skin tests used to diagnose bovine TB.

Professor Diana Williams, one of the lead authors of the study from the University’s Institute of Infection and Global Health, explains: “Tests to diagnose bovine TB rely on inflammation of the skin in response to injected TB proteins, but if the animal also has liver fluke infection, this inflammation is suppressed, reducing the detection of bovine TB.  This means that cattle infected with both liver fluke and bovine TB may not be identified by the current bovine TB surveillance scheme in operation in the UK.”

Professor Matthew Baylis, co-author of the research from the University’s Institute of Infection and Global Health, said: “The potential consequences of these findings are that infected cattle can continue transmitting BTB to other cattle, to wildlife reservoirs and, if they are moved from their farm of origin, to other areas of the country.  This may in part explain the continuing spread of BTB and the failure of the current eradication programme in the UK.”

The research team suggests that this finding can help improve diagnosis of bovine TB and speed up eradication of the disease from the UK.

The research was supported by the Biotechnology and Biological Sciences Research Council (BBSRC) Doctoral Training Grant (DTG) and the EU DeLIVER project.