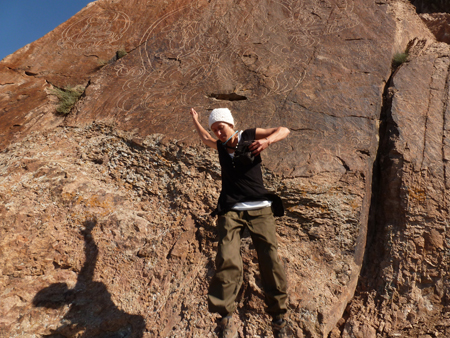 Dr Anne Laudisoit from the University’s Institute of Integrative Biology is photographed here exploring rock holes for signs of animal life near the Ilie River Valley in Kazakhstan, where there are also Buddha carvings assumed to have been left by monks in the 15th and 16th century.Dr Laudisoit is studying Yersinia pestis, the bacterium that causes plague, in great gerbils living in the deserts of Central Asia to understand the maintenance and dynamics of the bacterium in wild populations and how outbreaks of plague in the human population could be predicted in future.

Plague is still endemic in the desert plains of Kazakhstan, part of Uzbekistan, western China and Mongolia. Humans can catch the disease when they are bitten by fleas that have fed on infected rodents. The main hosts are great gerbils that live in burrow systems that are visible on satellite images.

Following outbreaks of the disease in the 1940s that wiped out some villages in Kazakhstan, a network of anti-plague stations were developed. Scientists collected data from gerbils and fleas to montior the occurence of plague and control the disease when it was coming close to villages. The information, stored in archives, was accessed and put under electronic format in the 1990s by scientists from the University of Oslo, Norway; Antwerp, Belgium; and the University of Liverpool.

The model, co-developed by Professor Mike Begon at Liverpool, suggested that detecting when this threshold was reached could act as an early warning system for plague. The model, however, had had some faults and in , order to make the model a useful tool for public health authorities, some refining was required.

Dr Laudisoit, is currently working with Professor Begon and a team of geographers from the University of Utrecht, on a new Wellcome Trust grant to collect new ground data to improve the model.

Dr Laudisoit said: “We are gathering data in the field and using remote sensing to identify the difference between ‘active’ and ‘quiet’ plague sites to help us understand the status of plague at various times of the year. Examples of plague outbreaks in the past have shown us that it can impact communities on a significant scale and then disappear as quickly as it arrived, only to reoccur again many years later. It is therefore important for us to understand how the bacteria survive in the wild and why it behaves in the way that it does so that we can predict outbreaks in human communities.”