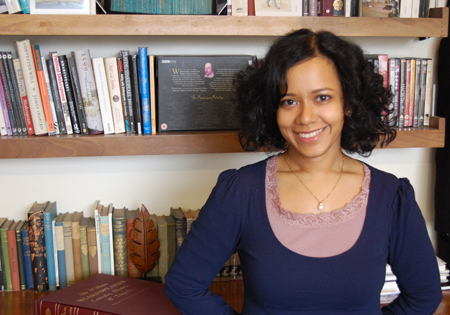 Dr Das will be making regular appearances on Radio 3, as one of ten New Generation Thinkers

Dr Nandini Das, a senior lecturer from the School of English, is one of the winners of the Arts and Humanities Research Council (AHRC) and BBC Radio 3’s New Generation Thinkers Scheme.

The scheme is a nationwide search for the brightest academic minds with the potential to turn their ideas into fascinating broadcasts.

Dr Das, whose research focuses on travel and memory in the Age of Discovery in the 16th and 17th centuries, will be exploring the stories of the very first English encounters with the Middle East and Asia.

She said: “This is a crucial time, when England was not only establishing its colonies in the New World of the Americas, but also making its first formal political and mercantile contacts with what it saw as the real superpowers of the ‘old world’, such as the Ottoman and Mughal empires.

“I want to tell the story of this period through the lives and adventures of the ordinary English people who got caught up in the current of that great surge of exploration. Their stories of friendships, fear, misunderstandings and interchange have rarely been told before. But they have to power to make us rethink our ideas of how the English made their place on the global stage.”

Dr Das has been recently awarded an AHRC Early Career Fellowship, a Leverhulme Trust Fellowship and the Renaissance Society of America’s Paul Oskar Kristeller research grant for her work.

Professor Rick Rylance, Chief Executive of the AHRC, said: “We are delighted at the runaway success of this scheme and once more it’s been a real pleasure to work with colleagues from the BBC on it. The quality of the applications we received yet again demonstrates the depth of talent among the new generation of arts and humanities researchers in the UK and the appetite they have to communicate their knowledge and enthusiasm as widely as possible. The successful ten were chosen from an exceptionally strong field and it’s going to be exciting to follow their work on air.”

Matthew Dodd, Head of Speech programming, BBC Radio 3, said: “Choosing this year’s New Generation Thinkers was quite a feat – the quality of ideas was so high. During the selection process we heard about new research in everything from psychiatry to linguistics and it has been incredibly stimulating. We’re looking forward to working with this year’s New Generation Thinkers to turn their ideas into successful broadcasts and to introduce our listeners to a new wave of some of the most interesting academic researchers in their field.”