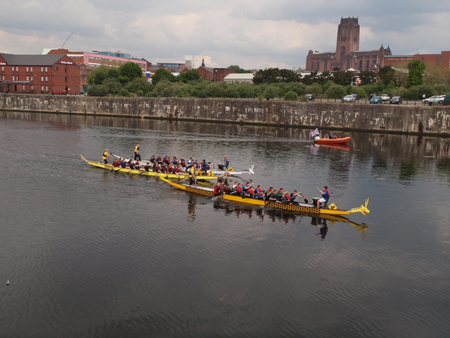 Schools from across the region descended on the River Mersey for the Liverpool Confucius Institute’s annual Dragon Boat race.

More than 150 youngsters from nine schools took part in the event, which sees 16 rowers take to each 42 foot craft and power to the finish line to the rhythm of the onboard drummer.

Liverpool Confucius Institute, part of the University, acts as a hub for the region’s growing relationship with China, working closely with schools, businesses and the community.

Each team raced in groups of three over two rounds, before a second round contest that produced a final between Alsop, Ormiston Bollingbroke Academy and defending champions, The Bluecoat School.

In a tight race, Alsop broke away to take the title and teacher, Paul Deakin said: “It’s been a great day, the kids didn’t know too much at the start but as soon as they got their rhythm they were great. It is a great event, well organised and we look forward to defending our title next year.”

Dragon Boat racing, or Duan Wu in Chinese, is accessible for all and Broughton High School turned in a respectable sixth place finish with an all female team. Teacher, Mike Reid said: “It has been terrific fun, they are a team of all girls but this has not disadvantaged them at all. They have really enjoyed the day and were buzzing when they came back up after the race.” Year 7 pupil, Abbey added: “The rhythm is the most important, it doesn’t matter how strong you are.”

De La Salle Vice Principal, Cath Flaherty said: “The Dragon Boat race is always an enjoyable challenge and is a test of drive and stamina. This year our Year 8 pupils have studied Chinese language and culture, and the race allows them to engage in more of the culture and traditions of this important country.”

The event was also welcomed by Liverpool City Council’s Education Officer, Paul Bradshaw. He said: “It is wonderful to see young people embrace aspects of Chinese culture. Many of these students will be learning Mandarin in the next two years.”