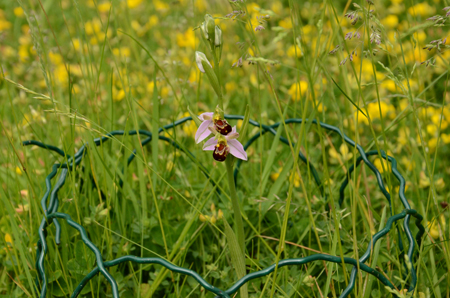 Bee orchids have evolved to mimic the appearance of female bees

One of the “finest examples of a flower that has evolved to look like an insect” is currently in bloom outside the Biosciences Building, in North Campus.

Bee orchids not only imitate the appearance of bees but even emit a chemical scent, or pheromone, to trick male bees into attempting to copulate with it, increasing its chances of cross-pollination.

Dr Meriel Jones and Dr James Hartwell, from the University’s Institute of Integrative Biology, study the flowers as part of their research into climate change. Dr Hartwell said: “Whilst the male bee pseudocopulates with the labellum of the bee orchid, it is in the perfect position for a sticky pad known as the viscidium to attach to the head of the visiting male bee. This sticky pad is connected to the male part of the orchid known as the pollinia. When the bee leaves the orchid he will have the pollinia attached to his head. When he visits the next bee orchid flower, the pollinia are positioned in just the right way for them to stick to the female part of the flower. Thus, the male bee is duped into cross-pollinating the bee orchid and gains nothing himself.”

Orchids produce the smallest and lightest seeds known amongst seed plants, allowing them to be carried long distances on the winds. Bee orchids are also good at colonising recently disturbed areas of ground, with low nutrient levels, but often grow below ground for five to eight years before sending a green shoot above the surface. They can be found on the Wirral peninsula, the dunes at Crosby and areas where soils are influenced by limestone or chalk.

Dr Hartwell said: “Bee orchids flower once a year, generally in June. Interestingly, we have noticed that the plants in front of the Biosciences Building start to flower in late May. This may be due to the protection and warming effect of the surrounding buildings. Bee orchids can flower for anything between a week and several weeks each year depending on the weather. In a hot dry year, their flowering period will be short lived, whilst the cool wet conditions this year have encouraged a lengthened flowering period for our bee orchids. It is generally considered that bee orchids only flower once before dying, but our observations of the plants on campus suggest that individual plants can flower repeatedly over several years.” 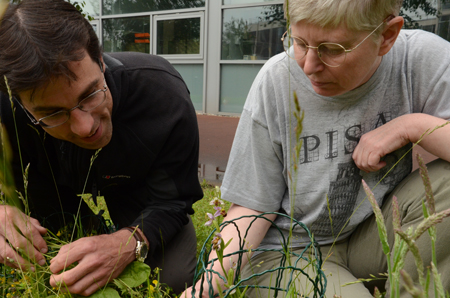 Orchids have long been a rich source of information for biologists, and Charles Darwin was particularly interested in the intricate co-evolution between the biology and morphology of the orchid flower, and the specific insect the flower has evolved to attract.

That research continues today, and Dr Hartwell and Dr Jones study the orchids’ genetics to compare those from the UK with bee orchids from other areas of Europe.

Dr Hartwell added: “Bee orchids reach the North-Western limit of their distribution within Europe in the UK and have been highlighted as a species that is expanding its range Northwards within the UK in recent years. We are thus very interested in these plants as a study system to monitor the effect of climate change and associated warming on the distribution of plant populations.”