A ‘double Z’ event observed at the heart of ATLAS: physicists believe Higgs boson decay would look like this, producing two Z bosons

Liverpool physicists who have played a major role in the search for the Higgs boson particle, are celebrating following new results which appear to confirm the existence of the Higgs.

The results were announced at a seminar at CERN, the European Organisation for Nuclear Research, which is home to the Large Hadron Collider (LHC). Scientists confirmed that a new particle had been observed in two LHC experiments, ATLAS and CMS, which appears to be the fabled Higgs Boson.

The LHC – the world’s highest energy particle accelerator – works by accelerating two beams of protons to almost the speed of light. The protons collide together 40 million times a second, recreating the conditions of the Universe immediately after the Big Bang, and enabling scientists to reconstruct fundamental particles produced at that time.

Results presented by the LHC experiments last December and by the Tevatron accelerator in Illinois earlier this week provided tantalising but inconclusive indications of a new particle with a mass of about 125 times that of a proton. After painstaking analysis of the all the data obtained so far, scientists have confirmed the observation of this new particle with a statistical significance which exceeds the golden ‘5 sigma’ standard above which they can announce a discovery.

Professor Themis Bowcock, Head of Particle Physics at the University, said: “This is cast-iron proof that a new particle has been discovered. It looks like the Higgs.

“Half a century after it was first proposed, and after a monumental effort by generations of physicists around the world, the discovery of the Higgs represents a major breakthrough in our fundamental understanding of nature. For physicists, this is the equivalent of Columbus discovering America.”

Liverpool scientists have been major contributors to the LHC’s ATLAS experiment from the start. One of the tracking detectors that sits at the heart of ATLAS was constructed at the University’s Semiconductor Detector Centre. Liverpool physicists also contribute to a broad particle physics research program carried out by the experiment and a team led by Dr Andrew Mehta and Dr Joost Vossebeld has been responsible for results produced in several Higgs search channels. A statistical combination of the results in several search channels is the basis of the results reported today.

“Although we knew the ATLAS results, none of us had seen the results from the other LHC experiment, CMS”, said Dr Helen Hayward, who also works on Higgs searches in ATLAS. “Once it became clear that the results of CMS confirmed those of ATLAS, there was little doubt that a real breakthrough had been achieved.”

The University’s contribution to the discovery of the Higgs was also mentioned in the House of Commons by Esther McVey MP, during Prime Minister’s Questions. She said: “Today is a hugely significant day for British scientists with the announcement of the Higgs Boson discovery (by joshua at dresshead.com). Six thousand scientists worked on it worldwide, 700 from the UK with a major contribution from the North West. A constituent of mine, Professor Phil Allport, at Liverpool University, helped lead the Atlas experiment.”

Although a formal discovery can only be claimed when both experiments submit the results for publication in a scientific journal, most likely by the end of July, there is no doubt that the Higgs particle has finally been pinned down. In the months and years to come physicists at the LHC will collect more data and try to establish the properties of the new particle. 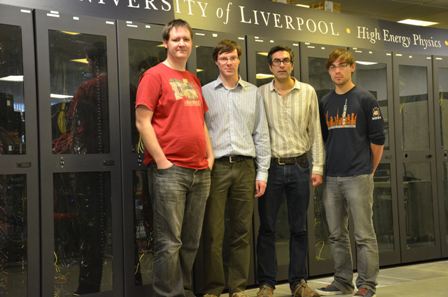 Prime Minister, David Cameron, said: “This is a great breakthrough, one that could be profoundly significant to our understanding of the universe and the fundamental laws that govern it.

“All of those involved in this important discovery deserve huge acclaim, in particular the many UK scientists, researchers and businesses that have helped make the Large Hadron Collider such a tremendous success.”

The University’s contribution to the discovery of the Higgs has been covered by a number of media, including The Guardian, The Daily Telegraph, Bloomburg, Sky News and The Guardian’s Science pages