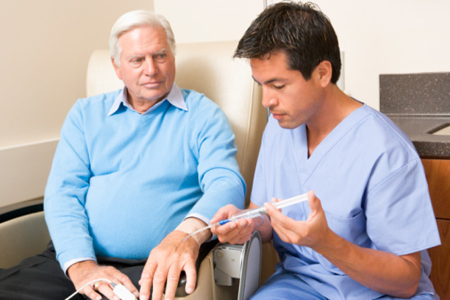 Scientists at the University of Liverpool have found that patients who receive chemotherapy following surgery for the removal of a pancreas-related cancer have a better chance of survival compared to those patients who did not have follow-up treatment.

Periampullary cancer arise from the head of the pancreas, including an area called the ampulla where the bile duct joins up with the pancreatic duct to empty their secretions into the upper small intestine.  Approximately 80% of these cancers can be operated on, but although chemotherapy after surgery has been shown to have a survival benefit, there have been no trials to fully understand the impact on patients.

Professor John Neoptolemos, from the University’s Institute of Translational Medicine, said: “The clinical presentation of periampullary cancer is similar to that of pancreatic ductal adenocarcinoma, and together they represent a major cause of death.  We conducted a study to determine whether adjuvant chemotherapy improves overall survival following surgical removal of the cancer.”

Working with 100 centres in Europe, Australia, Japan and Canada, the team looked at more than 400 patients who had undergone surgery for this type of cancer.  More than 50% of patients had died at the time of analysis, but those who had been treated with chemotherapy survived up to eight months longer than those who had not received treatment.

Professor Neoptolemos continued: “We found a statistically significant survival benefit to chemotherapy use after surgery, but the number of deaths from these diseases is still high, even after the tumour has been removed.  This research highlights the need to further improve and test combinations of chemotherapies to see if we can substantially increase survival after surgery and give patients the chance to have a good quality of life post-treatment.”

The research is published in the Journal of the American Medical Association (JAMA).