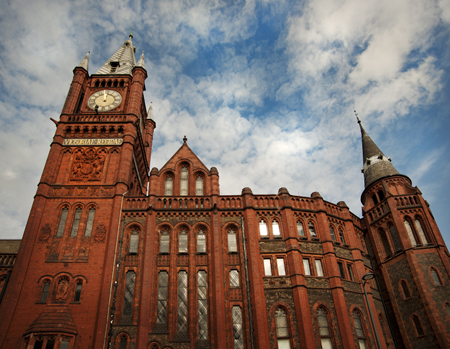 Honorary graduates, staff and friends of the University marked 120 years of the Victoria Building with the showing of a film at a dinner at St Georges Hall as part of this year’s graduation celebrations.

The film, produced by the University’s Corporate Communications team, explores the building’s history, the people that have passed through its doors, and what it means to Liverpool today.

Opened on 13 December, 1892, the Victoria Building inspired the term ‘redbrick university’ which became synonymous with the late 19th Century civic universities. At a cost of £54,000, raised through public support and donations from sugar refiner, Henry Tate, it housed the administration of the University, a library, lecture theatre, as well as teaching and common rooms for staff and students.

As the University expanded over the years, the building was only seen by students sitting exams in Tate Hall, but in 2008, against the backdrop of the city’s European Capital of Culture celebrations, and with public and city support, the building underwent a £7.5million restoration programme to transform it into a gallery and museum to house the University’s art and heritage collections.

Now in its 120th year, it is a gallery, museum, cafe, conference and wedding venue and enjoyed by staff, students and visitors to the city.