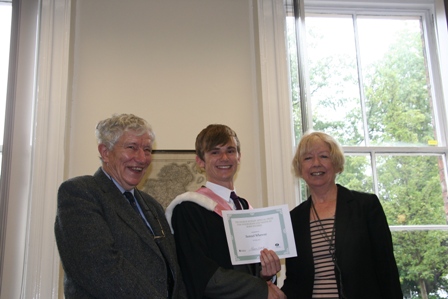 Sam wins £100 for his thesis on ‘The Evolving prose style of John McGahern’.

Sam has graduated from the University with a first class honours degree in Irish Studies/English, and has gone on to secure a place on a Graduate Training Scheme with the i2i events Group.

Professor Marianne Elliott, Director of the Institute, said: “We are very proud of Sam’s achievements, and are delighted to see that the attainment of the George Huxley prize is already assisting his post-university career. His thesis was an elegantly written and intellectually incisive contribution to the expanding field of work on the Irish prose master.

“The prize is given thanks to donor to the Institute, Professor George Huxley. His donation is used to set up the scholarship, and we are grateful for his continued support and encouragement to our undergraduates”.

Commenting on his prize, Sam said: “I feel honoured to have been awarded this prize. My time at the Institute of Irish Studies has been incredibly fulfilling, and my studies will stay with me forever. Thanks to Dr Frank Shovlin and the rest of the staff for making my time at the University of Liverpool so enjoyable.”