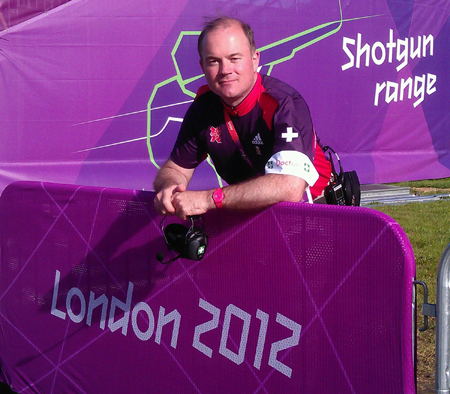 As Olympic fever sweeps the country, University of Liverpool Senior Clinical Lecturer in Child Health, Dr Calum Semple talks about his role leading the field of play recovery team at the shooting venue.

As an enthusiast of the sport, Dr Semple, of the Institute of Translational Medicine, was delighted when he was chosen to take such a vital role.

He said: “I do shooting as a recreational sport so I’ve ended up volunteering in something I’m interested in. I’m not the most athletic person myself but I do enjoy the sport so it’s nice to be involved in some way.”

The highlight of his Olympic experience has been the teamwork. He said: “We are working with a group of experienced sports physiotherapists, nurses and first responders who all have an interest in sport and really want to be here. The team is just phenomenal.”

The team has access to trauma kits and resuscitation bags if they need them. However Dr Semple emphasised how safe the shooting event is.

He said: “It’s busy here but it’s calm and very safe. We are there for the athletes, spectators and the officials to offer comfort and reassurance.

“Shooting is a very safe sport so we’re not expecting any injuries. People don’t rush around. The shooting is done in a very controlled way. It’s one of the safest sports there is.

“All incidents have been very minor medical complaints. There have been a few trips and falls, a few headaches and a lot of blisters, that kind of thing.’

“The challenges are working in many diverse sites and in a crowded environment so you have to have very good communication within the medical team and the other supporting services. We’ve got to put the patient first and consider the impact upon the games.”

He said: “Peter Wilson’s ability to recover well despite pressure was evident when a few shots away from winning gold he missed a pair of clays. Dahlby for Sweden had shot consistently in the previous round and became a threat.

“Nearly all of those volunteering on Olympic ranges and at the Woolwich venue are involved in sport shooting. Strict instructions to remain impartial were forgotten when Wilson calmly cleared the last six clays without fault and then fell to his knees in relief.”

Dr Semple has taken professional leave from his duties at Alder Hey Children’s NHS Trust during the Olympics but is continuing with his academic activities.

In his spare time he volunteers with the North West Region Amateur Boxing Association where he offers medical support.