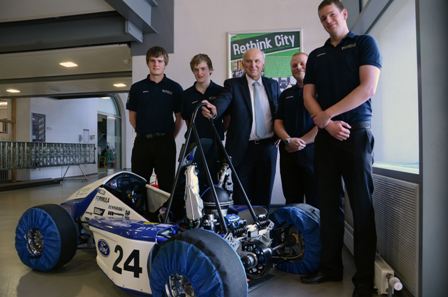 Secretary of State for Business, Innovation and Skills, the Rt Hon Dr Vince Cable, visited the University’s School of Engineering to discuss collaboration with aerospace industries and meet students involved in the 2012 Formula Student racing car.

The visit, hosted by Vice-Chancellor Professor Sir Howard Newby and Professor Ken Badcock, Head of the School of Engineering, included an introduction to the AgustaWestland-Liverpool Advanced Rotorcraft Centre (AWLARC).

Professor George Barakos, Head of AWLARC, and Jim Godman, Head of UK Research, AgustaWestland, presented their work on the development of computational fluid dynamics software to simulate the flow of air around helicopters, with the aim of optimising and increasing the efficiency of these versatile machines.

Mr Godman said: “We are very proud of the work that we are doing with Liverpool and Dr Cable’s visit was a great opportunity to share with him the programmes we are developing. We also discussed other Liverpool partnership work, such as the Technology Strategy Board funded-project to enhance the performance of tilt-rotors and work to introduce active trailing edge flaps on helicopter blades.”

Flight Simulation Laboratory Manager, Dr Mark White, led a simulated helicopter flight, piloted by Dr Cable, to demonstrate the research of the Centre and how the facility is used by external organisations in the field of aircraft requirement analysis, conceptual design, system evaluation, and in the study of flight mechanics and handling qualities of aircraft.

Dr Cable said: “Liverpool’s School of Engineering is a good example of how universities can collaborate with businesses to help grow our economy. The School’s focus on innovation, technologies, and products will boost the competitiveness of UK industry and help create the next generation of engineers and business leaders.”

The Business Secretary also met Pro-Vice-Chancellor for Research and Knowledge Exchange, Professor Dinah Birch, and Head of the Liverpool Formula Student programme, Dr Dan Hibbert, as well as the Formula Student team, who unveiled the 2012 racing car, they had designed and built.

Europe’s most established educational motorsport competition, Formula Student, sees universities from across the globe challenged to design and build a single-seat racing car in order to compete, demonstrate understanding, and test the performance of the vehicle.

Sam Dauncey, Team Leader of Formula Student, said: “The team was really pleased to be able to present the Formula Student 2012 car to Dr Cable and discuss with him what the project aims to achieve. This year has been the most successful yet for the School team, with our best performance over the summer at the Silverstone racetrack. We came fourth in the UK and 18th overall out of the 103 international competitors.”

Dr Cable’s visit to the city followed the announcement of the latest winners of £1bn in grants under its Regional Growth Fund (RGF). The Business Secretary met with drugs firm, Redx Pharma, based at the MerseyBio incubator which is run by the University, to learn about how the company plans to invest its £4.9 million award in developing new antibiotic and anti-viral treatment, for diseases such as MRSA and HIV. The funding will also contribute to creating more than 100 new science jobs in Liverpool.